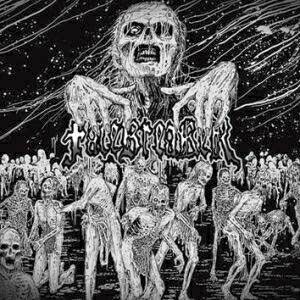 Am I alone in thinking that, when you're putting out a record with your band's logo on it, even something more like a collector's item, that it deserves a little more than just the bare minimum of content and effort? Facebreaker's Zombie God was little more than a teaser for their fourth and most recent record Dedicated to the Flesh, a 7" limited to 666 copies (never seen that before!), two songs, only one of which I believe to be exclusive to this release, the titular "Zombie God". It strikes me as a missed opportunity, because had this maybe 3-4 more songs the same quality as that one, all available only on this record or an mCD version of it, you'd have a pretty killer little EP.

Don't get me wrong, both of these tunes are pretty solid, the first side being "Legions of Doom" which would also be included on Dedicated to the Flesh, but it's just not a great value unless you're actually friends with the band or something. Not even the fairly bland b&w zombie artwork. On the other hand, Zombie God does exhibit some musical evolution, or rather devolution, since the songs here take on more of a thrashing death hue than the pummeling rent-a-Swede death metal dominant on the older discs. The guitar tone is still dirty, but thinner and less about kicking you in the chest, rather it tries to seem more coherently filthy and evil, with spikes of leads and a more seasoned, laid back tempo in the title track. Karlsson's vocals here are also a little more standout than usual, a hoarse and psychotic sounding growl rather that still lays in a few of the old gutturals, he simply generates a lot more natural malevolence with this style, which fits music that is more atmospheric and nocturnal than what you might have heard on Bloodred Hell or Infected. There seems to be a sheen of coldness here, like the grain filter you'd see on a modern horror flick trying to look more edgy and retro than it really is, but if nothing else, it spoke well for the forthcoming full-length...

In the end, while "Zombie God" is far from a disposable track, I just felt this 7" came up short. That's rather the point, sure, but I've got a number of EPs, splits and demos in this format which have all original content and give a little more bang for the buck. Imposed scarcity, collector's item, put it in your 7" bin and forget all about it until the day comes when you wanna wave dicks around with other hardcore vinyl fetishists, maybe in 20 years when people will be looking back on this old-new-new wave of Swedish death metal, mourning over how there were like these 417 bands that arrived over a ten year period that all sounded like the real forefathers Entombed, Grave, Dismember, etc. Ironically, here is where Facebreaker started to branch themselves ever-so-slightly away from that crop, so if nothing else hearing this ensured I was going to check out the next album, which I'd also advise you to do if you've never spent time with their music; either that or go all the way back to Bloodred Hell when they had that more straightforward, 'innocent' sound. Not a total loss, since you do get "Zombie God", but far from necessary as a product.