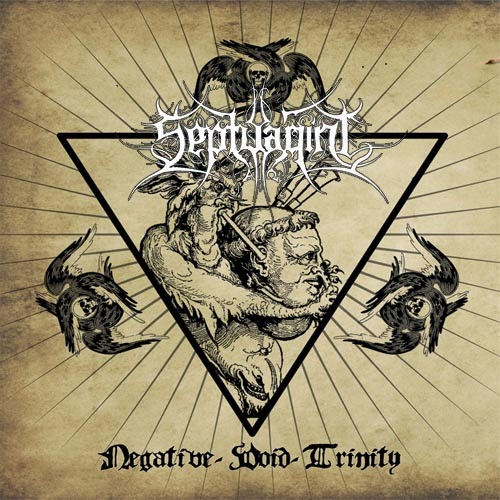 With Hail Spirit Noir's mesmerizing standard setting the standard, and a looming new full-length from Spectral Lore, the floodgates of my excitement for the Hellenic black metal scene have once again burst open in 2014. Upon finding this Septuagint EP in my promo pile, I had half hoped this might add a little kindling to that fire, though they err a little further on the side of convention than a number of their peers, pursuing a more forceful, blast-oriented style of songwriting that mirrors some of the more extreme Scandinavian black metal acts like Marduk or 1349. That's not to say this quartet (formerly dubbed Destination: Holocaust) pursue that path to a fault; they are quite conscious of incorporating some slower, moodier variation into the punishment zone, but apart from a few curious chord patterns, Negative Void Trinity isn't likely to surprise anyone who expects his/her black metal to possess a momentum rivaling the speed of light...

Seriously, this guy's blast beats are so unrelentingly freaking fast that they leap entire time zones, so it's a good thing he'll pace himself or else the listener might get dragged along in the quantum current and begin to age at a frightening speed. Hyperactive tremolo picked progressions fly everywhere, often a fraction more mystical or unpredictable than we might assume from 20+ years of the stuff, and the floods of chords utilize a lot of dissonant Norse structures that keep the material unnerving and 'on edge'. Even when the group slows down a song to something which won't rupture your arteries, they go for haunting vistas over which the ugly and harsh vocals drift, and thoughts become specters wafting through the winds between the surges of incendiary speed you know are right around the corner. It's almost at a grind level during some stages, only without the politics or hardcore spastic attitude. Sometimes they'll throw in these weird, almost siren like riffing melodies (like in the bridge of "Psalm II") which add a layer of alarming discomfort while the voices seem more manic and subdued, and Septuagint are just that sort of black metal which reminds us that we are not safe and NEVER SHOULD be safe. Having recent suffered what might be my first 'anxiety attack' (sorry anti-thralls, I'm still very much alive), I can honestly say that Negative Void Trinity wasn't far removed from that experience!

There are a few concessions, of course. This isn't material that I'd define as memorable, even when it grows the most interesting doing the mid-speed segments. Also didn't notice the bass much, or rather I heard it but it just seems drowned out by the blood spatter of the guitars and the constant madness of the vocals which often erupt into these screw-loose, raving shouts or sustained, hostile rasps. The composition is not long on complexity, but instead juxtaposes intensity for subtlety; and in fact it is so damned belligerent in spots that I think it possesses a measure of appeal for fans of insane war metal stuff like Impiety, Angelcorpse, etc just as much as those seeking sinister, agile black metal. Is this one of the more interesting Greek acts? No, far from it, but something could be said for how they weave in just enough deviation from the norm to keep the content menacing and invigorating, no chance of hearing this without your pulse quicken and succumbing to either a major migraine or cold chills to the forehead...if just a little bit. Didn't love it, truthfully, but I found it compelling enough that I'd enjoy checking out a full-length with some further variation, though the ferocity should always remain a focus.