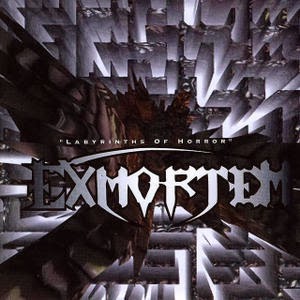 Another of those casualties of the mid-90s death metal era, who nonetheless managed a substantial career of six strong albums over 15 years. More than anything else, Denmark's Exmortem might have suffered from having forgettable artwork on most of their albums, because they just might have been the best band in their scene, easily elbowing out more visible contemporaries like Iniquity, Invocator and Illdisposed in terms of consistency and long-term appeal. Labyrinths of Horror is only the tip of the iceberg, but remains one of the first outings of theirs that I would heartily recommend. Now, more than ever, the cloud of old school death gnat...advocates born through the later 80s and 90s should give this group some of that long-delayed affection they always deserved, because they sit so perfectly balanced upon that precipice where simplicity meets brutality, borrowing only from some of their most impressive forerunners, and ensuring the listener that he or she will feel completely run through. Impaled. Gore. Trampled. Left to ponder the wisdom of becoming a death metal fan in the first place. Yeah, motherfuckers, you should have just gone with Weezer.

Denmark never really had a unified 'scene' aesthetic, unlike the Scandinavian sects of Sweden and Finland, so this doesn't precisely sound like Panzerchrist or Corpus Mortale beyond the obvious similarities in growls, guitar tunings, and general unfriendliness of the genre. Labyrinths of Horror is possessed of this rich, ripping guitar tone which can run with most of the Swedes, but the total nihilism of the main vocals and mindless blasting that often breaks out here has more in common with the US scene, specifically Florida and New York, some ungodly union of Obituary and Incantation. There's also quite a bit of Dutch inspiration, particularly via Pestilence or Asphyx, largely in the backing vocals which take on the grotesque pallor of Martin van Drunen (with a little John Tardy for good measure). Really, though, this debut shows the Danes at their most 'innocent' and straightforward. Labyrinths is an entirely riff-driven, ugly death metal record with about as much subtlety as a trash bag of human body parts left stinking behind the slaughterhouse. Doesn't take a huge leap of logic to realize what happened there, and what will happen to you if you were to fuck with these guys...guttural, slimy, evil, and eschewing melody for pure, punishing viscera.

Not a lot of atmosphere, and the riffing progressions are not necessarily the most memorable nor the most malevolent in composition, so it's clear Exmortem did not have a debut on their hands which would rival icons of the first wave like Left Hand Path, Realm of Chaos, Altars of Madness, etc. Intelligent, viral lead outbreaks are also not really a part of this picture, it's all too 'working class'...this butcher isn't working the leanest cuts of meat for an upscale banquet, he's just hacking into whatever is unfortunate enough to happen along. But at the same time, there's a particular timelessness to the meaty rhythm guitar tone, the spankish drum production and the overly ominous, deep Craig Pillard-esque growl which still makes me pull the covers over my head and pray for the killer to pass me over and kill the person in the next house. Alright, I'm exaggerating...I'd just shoot the bastard, but it's difficult to imagine even a handful of bullets putting this grisly beast down. Labyrinths of Horror isn't unique, it's not innovative, it's not melodic, it's not the best album by Exmortem and it doesn't care. In fact, there's nothing 'labyrinthine' or complex anywhere, which is the worst you could say for it. Simply a mouldering heap of rot, flies buzzing all over it, rats pulling at scraps as you gaze on in horror of how a living, loving, laughing being could become just yesterday's meat. You know you want a bite.