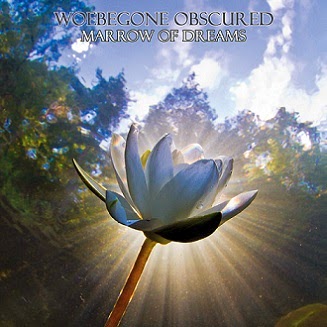 Though I laud these Danes for expanding greatly upon the sounds of their 2007 debut Deathstination, I still found myself having several hangups with a complaint I usually lodge against doom metal albums which overstay their welcome: if you haven't got enough material to really swell out a track between 13-20 minutes in length, then it might be better to chop them down. Not that there's anything particularly terrible in how Woebegone Obscured 'pad' out the intended epics, but as a sort of transcendental, 80 minute listening experience, this one often seems more empty than full. 'Empty' in the way that a lot of doom metal bands feel this genre needs to feel, perhaps, but hardly conducive to a mesmerizing or compelling auditory escape, so as much as I attempted to engage with the naturalist imagery of the packaging in contrast to the dreary glories of the compositional style, I just never sunk into that next level of immersion.

That said, Marrow of Dreams is an acceptable listen if you're in the mood for just something slow that might sort of fade off into the background, mood music for glade-gazing and cloud-counting which maintains a fraction of the gloomy edge of its predecessor. In fact, this is sort of like a 'life' alternative to the 'death' of the debut, and conveys its sense of sadness and expression in brighter shades than that crushing murk. There are still some pretty pure death/doom tunes like "In Suffering Darkness Dwell" which border upon the funereal, but even there the glacial melodies or cleaner strings woven throughout have an almost abstract notion of warmth that permeates the dusky, drawn-out chords. With almost no exceptions, I greatly preferred the more spacious and ambient-imbued passages of the album, where the strings really breathe, or where the cleaner melodic vocal tones reign supreme, or perhaps you'll hear a natural sample or two, but this is not exclusive, since the chugging and growling is almost inevitable, and it's almost constantly mundane in construction with no real creativity beyond the fact that there are often other atmospherics measuring off against it. Intuitive and simplistic as a rural trail, but lacking thrills or surprises around any corner.

Even though they occasionally drift into awkwardness, the variety of the vocals is actually a stronger point, with the more ethereal, tonal voices balanced against death/doom gutturals and a slightly higher rasp, it seems like there are multiple personalities in contemplation against the mourning naturescapes. The guitar melodies are also quite solemn, like a slow rain on tree leaves as it crashes to a forest floor, sort of reminded me of what I liked so much about Paradise Lost's amazing Icon record, only nowhere near as catchy or concise. This blend of slower, almost folkish doom atmosphere also had me reminiscing over the Yearning debut With Tragedies Adorned, a little known Finnish album which conjured up a comparable, rustic sense of environment with rays of sun glaring off hillsides and woodland canopies. Alas, where those works had the benefit of tighter songwriting, this one just tends to drift along the river for far too long, never quite losing sight of its purpose, but nevertheless rambling on inoffensively. It's not a bad album, but perhaps a little more indulgent in its vacuity than I was prepared for, and as a result not much about it stood to memory, very few moments inspired me to return to them repeatedly.