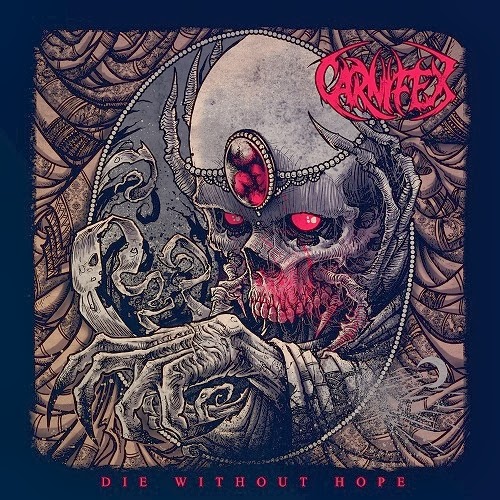 Often, when I think of the deathcore scene as a whole, I imagine a group of guys walking around in the dark with their dicks in their hands. 'Will you suck it?' 'No, suck MINE.' The music is just that much of a primal biological impulse programmed into its creators, who often seem unable to separate themselves from the many years of chugging metalcore and djent mandates that predate them. The artistic merits of a Terrance and Philip skit. Bad music is the new good music! Does that make all the records in the style reproachable? Absolutely not...if they can put the notes together correctly, and summon up just enough variation and musicality, they have and will write some truly entertaining shit, in particular the atmospheric or symphonic suburbs sprawling off to the left of Beatdown Avenue. Conversely, this will draw the resentment of a small minority who prefer the niche at its most '13-year-old caveman-cumming-of-age' with copy/pasted slam sequences and whiny lyrics of heartbroken angst informed by whatever Pantera, Killswitch Engage, Slipknot, Converge or Slayer records they happen to own. Angels falling, wings ripped. Hands bleeding. Men clutching themselves in corners, unable to rise above their emotional agony. Girls are, like, NAZIS! I'm totally gonna fuck up this gym locker!

At any rate, Californians Carnifex were really starting to metamorphose from such a cocoon. It's been a long time coming, and goddamn did this group suck to begin with, but steadily they have ascended into something resembling a band which releases albums that I don't instantly want to remove from my CD player, peaking with 2011's Until I Feel Nothing, an album that many diehard followers of their old stuff disliked, which would seem to yield a default recommendation. So naturally, that disc's successor was the first that I actually found myself anticipating...okay, not really, but Die Without Hope might damn well have proven the first Carnifex album I could define as 'good' with a straight face. Once I saw the cover art, I was even more curious...could they have integrated a little old school death metal into their sound? Sadly, this is actually a step backward from where they are headed, without exactly abandoning the direction of the last 2-3 full-lengths. It's testosterone-charged slammy deathcore with loads of soulless chugging, and the caveat that these guys at least put some effort into their leads, and intto generating a modicum of complexity with the use of more atmospheric or tremolo-picked guitars as an enforcement upon the standardized tropes that plague the album, the sub-genre, and inevitably result in my lack of interest after a number of spins through it. Die Without Hope is certainly no backpedaling to the mid-oughts, and I think these guys clearly continue to imbue the material with their melodeath and modern thrash inspirations, but it's all so painfully average.

What continues to really kill their sound the most is how generic the vocalist is, you could literally transplant a frontman from anywhere else in the medium, and apart from comparing and counting neck and sleeve tats, there would be no difference. Vapid Americore growling and snarling which traces its history all the way back to those earlier Deicide/Carcass as translated through countless grindcore, metalcore and melodic death metal acts hailing from England, Sweden, and Uncle Sam. There is no individuality, no legitimate sense of torment or torture...I really do not feel like I get to know this guy whatsoever, his trials and tribulations, and it really puts a dampener on things. It's not tough sounding, and it's not remotely sinister. BE SINISTER. Come to Satan, my darlings! But, no: overbearing, predictable and boring would be more accurate. There is no technical deficiency...he can bark on tempo and there is real wind coming out of his lungs, but you've just heard it so, so, so many times and its naught more than a superficial brutality in execution. Beyond that, Carnifex are entirely competent, with storming percussion that can easily handle all the standards: double-bass chokepoints, seamless blast beats and simpler, sparser beats to support the swarthy palm-muted grooves. The bass guitar really gets lost for me...I mean, I can hear it but I'd rather the guy perform some more unusual lines that stand out from the chugging rather than support it so closely. A little more depth, richness and complexity to these mosh parts would not be a hindrance.

But I can be thankful that, almost unanimously, the breakdowns are affixed with tinny little melodies or other busy distractions that feel much more fulfilling than had they not been present. They are clearly not afraid to contrast those harsher, caustic bludgeon-fests with some eloquence or grace, and while the melodic bits are vastly outnumbered, the leads are fairly professional and the overall experience of Die Without Hope really relishes in that modernist, 21st century extreme metal sensibility which I'm not at all shy around...I just want the songs to be good. These are largely interchangeable, you could throw half the grooves into the other songs and not notice any difference, so perhaps it suffers from a little too much consistency. Not always a detriment, but here it made the record tiring long before the 38 minutes ground to a halt. The mix of the album is a sure bet for followers of the style...titanic, punchy, and yet not negligent of all the minor details. In other words, the vest metal legions will fucking hate it, but if you're down for what you generally hear from bands like Job for a Cowboy, Whitechapel and this one, then it's to be expected. I mean, as old as I am, and as much as I love old metal, I'm not the typical 'get off my lawn' type. I am down with what the kids are trying; I simply have faith that many of them can do it better. Personally, I just got bored by the modular nature of this music. Carnifex has proficiency locked down, and they deliver some variation and texture to the degree that they seem to think about what they're doing before they record it, but I really wish the songs would just stick more...and please, reach within yourself, and try using a different vocal style for once, even if it's just a fraction removed from what is on this album. With some feeling.