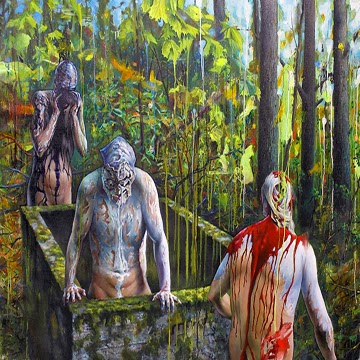 After taking quite an eclectic detour with their 2013 organ music effort Resitaali, which I might add was quite good, Finland's artsy, Bizarro world black metallers Jumalhämärä return to a heavier, semi-familiar terrain with but a single, extensive 17-minute opus entitled Songless Shores. Right from the start, before you've even begun to listen through this, they've got you wondering with that excellent, completely abstract cover artwork that is almost impossible not to stare at; and to little surprise, the music has the same effect. Okay, your ears can't necessarily 'stare' (at least I hope not), but if they could, they would not be able to avert their gaze from this song, which is both tremendous and completely off the wall. That is what Jumalhämärä does, what they will continue to do, and you can either lay back with a surreal set of shades and enjoy the experience, or fuck right off.

That's not to say that Songless Shores isn't so bonkers that it often devolves into a disheveled, disjointed wreck, but it's a beautiful mess and not one to take for granted when one is so often bombarded with the predictable and traditional. What sounds like a cacophony of chiming clocks builds up into a swell of roiling tremolo picked guitars, swerving bass line bombast, wretched growl/rasps and groovy drums which feel more appropriate for a prog rock record. Admittedly, the beats seam a little smothered in the mix, to the point that they become disparate from the thinner, droning guitar lines, but the way all these fragments come together feels like someone writing shoegaze music while taking a lot of prescription meds and staring at a Dali painting. The tune calms near the center, with some folksy strings and native instruments that seem like you're a few streets away from a festive urban center on a peaceful eve, until it transitions into a distorted, unnerving landscape of ambiance and semi-industrial clatter, ominous choir harmonies and then ultimately the sound of some running water and some male chants that drift into closure...

I was half expecting the thing to cycle back into some metallic augmentations, but can't say I'm dissatisfied with this sort of linear, adventurous songwriting. Point A gave me absolutely no warning whatsoever of where I'd be ending up at Point B, and it was like watching a fresh-to-my-eyes, but antiquated art film at college. Granted, not all of the forward motions through various genres wind up as the smoothest mutations, and the experimental nature of Songless Shores seems to be worn proudly on the sleeve, but ultimately you just have to be grateful there are bands like this unafraid to take a piss on convention and search themselves through a plethora of unusual aural environments. The lyrics to this were great, they definitely seemed to have a more folk/historical theme to them, which I also felt through the sheer musical output of Resitaali, but as an outsider I wasn't able to completely decipher their cultural significance (my own shortcoming). Still, this is not a hindrance for me, because if anything, the track becomes even more enigmatic and obscure. At any rate, I have never disliked anything I've heard from these Finns, and though this was a little less fulfilling than their 2010 full-length Resignaatio, they continue to stand alongside their other band Mörkö and the slightly more accessible Oranssi Pazuzu at the leading edge of psychedelic black metal from that part of the world.

Verdict: Win [8/10] (remember to flog your children properly)
Posted by autothrall at 12:30 AM