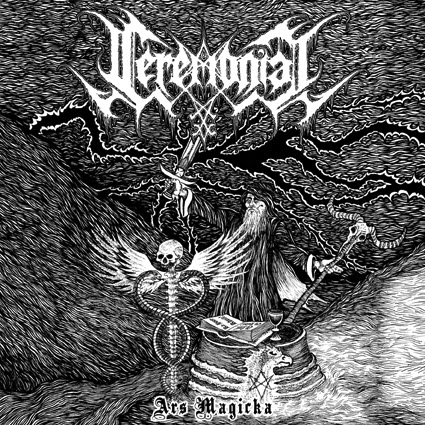 Confirmation that charisma and atmosphere can easily trump a fairly basic riff-set, Chileans Ceremonial leave the listener with absolutely no room in which not to have a good time, unless that listener is a fuckin' SQUARE, in which case we don't care! Blackened, crispy thrash with gruesome vocals slathered in a reverb that cuts straight over the riffing passages, they sound like they had as much enjoyment making this as you will experiencing it. At under 14 minutes, the EP has come and gone like a night of beer swilling, battle jacket staining excess, leaving those bitches at the local metal bar with a few blackened eyes and broken noses but all in good fun. Plus, with such a concise delivery and no nonsense cluttering the script, you can just keep spinning this over and over, another fitting acquisition for Blood Harvest records.

Granted, Ars Magicka might not prove anything special in the long run, because a number of the riffs here are truly cut and pasted from a number of their influences, ranging from the nearby Brazilian death/thrash scene of the 80s (old Sepultura, Mutilation, Sarcófago) to the seminal Teutonic tyranny of Kreator and Sodom, the raucous filth of early Bathory and all that old 'blast first think later' black metal out of the Scandinavian scene in the mid 90s. Repulsive, thick and distorted bass-lines moor a fairly standard slew of chords and tremolo picked guitar lines, but they manage to come off somewhat sinister nonetheless, and the tinny blasting skills of this drummer are constantly on fire. The icing on the cake, however, is the grotesque blackened vocal rasp of the front man which resonates off the roiling, hellish riff progressions. He'll go for a haughtier bark, with just a few flecks of blood coughed up, and then inject some more snarling black metal passages to offer just a mild degree of variation; but it all sounds pissed off, even though it's mixed at such a level that the actual syllables can get lost against the rapidity of the drums and guitars.

There's enough 'thunder' to capture the war metal crowd, and to be truthful they veer a little more towards the pure black metal aesthetic, occasionally rolling out a mid-paced Bathory part or a slower chord series reminiscent of Slayer. Higher pitched tremolo melodies burst out to transcend any lapse into monotony, and there are some total charge parts in tunes like "Tribulation" which should thrill fans of absolutely mindless grinding black metal with no concern for subtlety or innovation whatsoever. Thankfully they don't play the punk card and go into a very boring riff component. The limitations are just that not one of these songs is going to really stick out in your memory for a long time coming...it's mood music, front and center, all been done before but I just don't get too tired hearing it when a group like Ceremonial comes along, breathes a little fire into it and manages to convince me that sometimes I should stick a sock in my quest for originality and just have a good bloody time. Ars Magicka is black/thrash hot sauce, you won't wanna apply it to every meal but there are certain forms of cuisine that just cannot thrive without it.