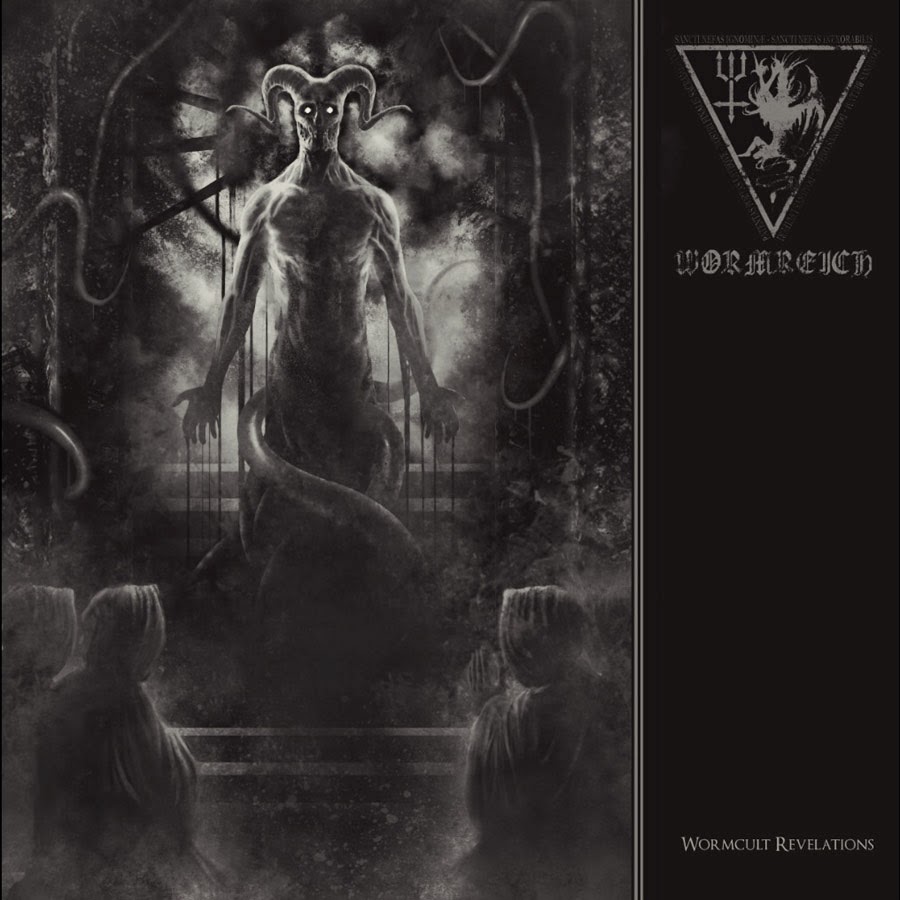 Wormreich is one of those band names so fantastic that you just wish you had gotten to it first. These Southerners have a seasoned spin on traditional black metal which remains vile and claustrophobic with some slight nods to ambient orchestration due the incorporation of keys and atmospherics, not only in their own intro/interlude pieces but as an added layer of texture to the blasting violence they induce. I don't recall ever having heard their 2011 debut Edictvm DCLXVI despite the cover seeming very familiar to me, but at any rate Wormcult Revelations has a fairly sinister appearance to it which I believe the band does well enough to match in the songwriting throughput, even if this isn't ultimately 'novel' or something we haven't encountered in the past.

But it's well-paced, and reasonably well-played. Floods of faster guitars and blast beats are interspersed with slower, ominous passages where dissonant picking patterns hover above busier bombardments of double bass, groaning, murmured vocals that evolve into hacking cough rasps which invoke evil. There's enough variation in the structure of the riffs to make a difference, though it all seems coherently oblique and ritualistic in disposition. The harsher usage of the vocalist isn't exactly unique, just a nihilistic traditional snarl which is barked out pretty loudly, occasionally accompanied by a lower-pitched growl for emphasis. The drumming is an incessant thunder through which you can make out a lot of the crashes and toms but the snare is partly subdued. Bass lines are thick flumes of dark subtext which don't often distinguish themselves from the rhythm guitar notes, but in conjunction with those bricklaying kicks they definitely give the album a firm bottom end over which the guitars just simmer with malevolence, or at least try to.

There are definitely some more chaotic, swirling components to the writing that involve driving walls of uncomfortable notes, and there is also a slightly disjointed aesthetic to how they transition from one rhythm to the next, but I took this more as a calculated risk than just sloppy playing. The vaunted, dark choirs, organs, keys and other backing sounds here are used a little more sparsely than the typical symphonic black metal record, but where they appear they definitely give this a more grandiose, subversive horror sensibility. I really enjoyed how the symphonics swelled through "Codex Lvcifervm", which is the most substantial non-metal track on the disc and reminds me a lot of 90s ritual/ambient or dungeon synth, only using a more fulfilling sound set which is akin to the soundtrack for some horror/haunted video game. I felt like Wormcult Revelations actually had just the right balance of the arcane, wondrous and menacing, though if you broke down a lot of the guitars the actual riffs can seem bland in spots. Anyway, while you've got traces of old Euro black metal circa Limbonic Art, Emperor, Mayhem, Old Man's Child or Enthroned in there, they don't resemble anyone too closely, and along with labelmates Haeresiarchs of Dis from San Jose, we might be seeing a new wave of high concept symphonic black metal that's nothing to scoff at. Ugliness meets eloquence.