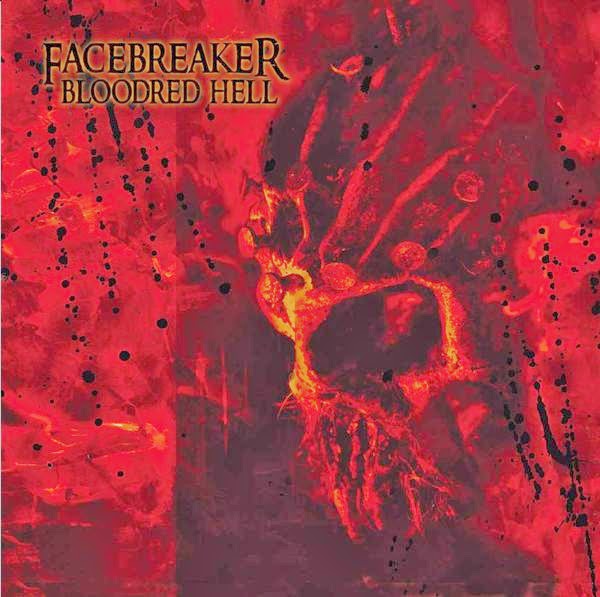 Facebreaker is another of those 'slightly behind while simultaneously ahead of the curve' 21st century Swedish death metal throwbacks which formed about 15 years ago and started churning out records about half way through the prior decade. A little too late to be Bloodbath, but they arrived on my radar well before this current tsunami of Left Hand Path and Dismember soundalikes, along with some of the Rogga bands like Ribspreader. Comprised of a number of that scene's veterans, including growler Roberth Karlsson of Pan.Thy.Monium, Darkified, Edge of Sanity, the Bloodred Hell lineup took an approach to the style that had a more urban, tough guy aesthetic rather than the graveyard eeriness and atmosphere pervasive in so many of their peers, and as a result this does have a streak of straightforwardness that should appeal to fans of records like Grave's Soulless or Edge of Sanity's Cryptic. That's not to say it's at all unique, in fact this functions on a fairly generic set of chord progressions, death metal 101, somewhere between mid 90s Cannibal Corpse and the Swedish 'regulars' of that era, but it's probably one of the most likeable Facebreaker discs, and one that, apart from shifts in studio production, they never seem to deviate from even a decade later.

Obvious chugs and denser, repulsive chords definitely carry forth the borderline Entombed death & roll influence while seeming a lot like a meatier spin on 90s thrash; there are certainly some d-beat driven segments on the album ("Total Wasteland"), but as a whole they go for that real sense of groove balanced against a moderate death metal momentum. Normally such a stripped down, barebones style wouldn't contribute much to my enjoyment of an album, but the pacing of the tracks and the general quality of the riffs seem strong enough that I can listen to this 10 years later and still get as much value as I did in 2004, though it was never and should never be considered any sort of 'exemplary' entrant into the medium. But there's enough charm to Roberth's growling, even if he's not so distinct among peers, and the lead sequences here seem excitingly scripted (like the one in the bridge to "Crushed") that it reminds me often enough of why I got so into the stuff as a teen in the late 80s. A savage, honest crunch to the rhythm guitar, solid drumming, and a bouncing and repulsive bass tone that always hovers through the mix, it seems really that all the instruments are set here at an appreciable balance and that's one of its strongest points, really. They're also not averse to throwing out some cleaner guitars ("Hater") but these do seem a little more subtle and drowned by the crushing force behind them.

Ultimately, the Facebreaker debut is by-the-book, blueprint Swedish death metal which is  probably not going to convince anyone these days who has become jaded with the form. I actually include myself among that crowd, but happened to have heard this band long before most of the stuff that arrives in my promo box, and I can still throw this on with a little Jagermeister, some gore flicks and/or boob rags and have a pretty good time with it. I mean no insult when I say that this is like the equivalent of 'frat house death metal', a phrase that might be meaningless outside of my lacking American culture. The intention here might be some brutish, lowest-common-denominator death, but in knowing their limitations, these Swedes pull it off with some integrity. It's the kind of record where, if you just shut your mind off and lower your expectations, pretend your a teen again, or a kid, or whenever you first caught the bug, you'll find it amusing and moshable and the antithesis of pretentiousness. Absolutely for fans of Ribspreader, Paganizer, Mr. Death, Revel in Flesh, etc. A solid guttural expose for the next kegger, you might imagine if there were like a fraternity of student morticians they might get down to this late at night in their classroom/labs while the instructors remain blissfully ignorant. Beer bonging off body bags, party hats on cadavers, vuvuzelas waking the dead, Bloodred Hell, motherfuckers. This isn't Thug Life, it's Thug Death.