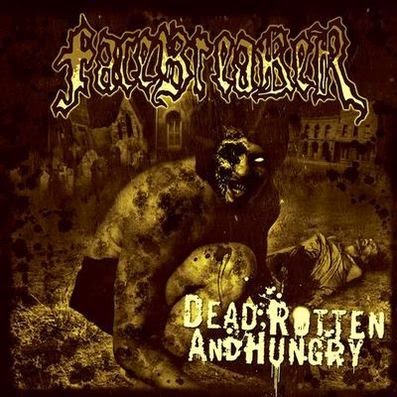 Dead, Rotten and Hungry does not seem the sort of album that would take four years to release, but by the time it showed up the Swedish retro death metal movement was in full swing, no longer the province of a few artists who were lovingly paying tribute to themselves or their countrymen, but a bona fide fad harboring the masses of the creatively lacking. Apart from the slight zombie nod, another trend that has gotten completely out of fucking control as we neared the Teens of the 21st Century, this was aesthetically a direct continuation of Bloodred Hell, albeit with a few production tweaks that brought it more in line with the pure Dismember/Entombed worship and a few nods to the mighty Bolt Thrower. It's almost an enjoyable experience if you've not already become jaded with the style, which is much more likely today than in 2008 for anyone paying attention to the myriad records coming out that sound like this. Facebreaker nearly succeeds by the seat of its maggot-jacked underwear, but has a weaker second half, and ultimately doesn't leave an impression beyond a few quickly healing bruises.

The guitars here are definitely a little uglier as they reach even further into the legendary Swedish playbook, but I also think they've got a more built-in appeal to the masses of retro worship, not to mention all the Entombed-core bands at large that have also taking this cruddier tone into extreme music at large. They're not as gruesome or dirty as Mr. Death or Tormented, but enough that this is the sort of album kids are gonna pick up for the production without even caring about the quality of songs. As for the riffs themselves, they're quite a bit like a blend of later Bolt Thrower meets early Dismember, with nothing really sticky about them, but the tremolo picking just feels so huge here that it's easy to get into, and the meatier chords come off as as a potent counterbalance. Spurious, infectious little leads break out here or there but not often enough, and I also felt like the track list got a little more redundant and uninspired as the record progressed. The first half feels more repulsive and powerful and the latter lapses into a semi-lazy arrangement of tunes you might find on any random Rogga Johansson record circa Ribspreader, Paganizer or Revolting, big grooves and 'authentic' atmosphere to those seeking the re-Swedening, but nothing compelling beyond a handful of listens...in fact, if not for 3-4 lacking tunes, this would be closer in quality to Bloodred Hell.

Otherwise, it's basically 'Double Bass: The Album', because Jesus Christ...double bass. A fortress of brick flinging, always in time, reminding me again of how Bolt Thrower used to do it only ramped up on 'roids, and only disappearing when it just wouldn't make any sense to continue the barrage. 'Robban' Karlsson's vocals have a little more sustain this time around, but once more he's rather indistinct when you compare him to death metal frontmen at large...a little Karl Willetts, a little Steve Tucker, and nothing that would stand out if you had him in a lineup. That said, his growling definitely hit me in the mid-section for the first 15 or so minutes of the record and the production is just excellent, layered upon with a few higher pitch snarls that seem like paeans to Carcass and Deicide, but never dominate that lower end. The bass guitar 'shows up' and collects its pay, but never does much to distinguish itself beyond achieve the raw sewage appeal while sniffing along the guitar progressions. Facebreaker also adopted one of those logos which looks to have that tough guy US hardcore font, only a bit more grotesque because this is undead fuckin' death metal we're talking about, and yet it largely has the same effect as pissed off, highly produced 21st century hardcore, a zombified beatdown with nothing necessarily creepy or malevolent included, just locker room death metal that you'd pump before the big game.