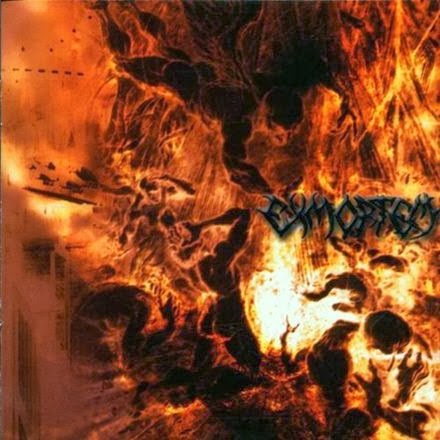 Exmortem's third album, Berzerker Legions is perhaps their least interesting and most straightforward, but that their nadir is still a relatively good time speaks to how solid they've always been. Never quite a dull moment if you like your death metal blasted and relentless, but what I thought was the most curious about this one was the lineup. After seven years, not a single original member remained...Exmortem now revolved around the Dejected in Obscurity guitarist Sigtyr, and he hooked up with a pair of total powerhouses to record this. One is Reno Killerich, who by that point hadn't quite carved out a name for himself as the temporary Dimmu Borgir drummer, but had played on Panzerchrist Soul Collector; and the other, vocalist Simon 'Smerte' Petersen, who may be known to you for fronting the excellent Horned Almighty, where his wretched growls are really a lot more impressive than he is here, but not so much that you can't make a distinction.

With Killerich, you know this thing is going to be a blasterpiece, and to that extent you won't be let down. A lot of faster paced material circa Morbid Angel/Hate Eternal with a fibrous level of distortion that tears out a gajillion tremolo picked riffs, some of which are assembled catchier than I might have dreaded. There is notably less variation than on Dejected in Obscurity, so I felt entirely dependent on the riffing patterns and vocals to carry the material, and thankfully it succeeds, with the caveat that it's not the sort of record I want to spin often or in its entirety. Honestly, I feel similar to a lot of the Panzerchrist offerings, in that the disc is meticulously constructed aggression which simply doesn't rise above its brutality, its genre standards, to walk with the giants of the genre. Just a lot of intense drumming and traditional death metal riffing with a ghastly vocal presence that sometimes gets lost in the barbarism if you're not paying close enough attention. I just find Smerte's attack far more effective over the black/punk or black/rock leanings of his currently active band, but if you listen in you can here he's got a great sustain to his growl and they seem to often throw a few filters on him which gives the album a somewhat futuristic/apocalyptic impression.

Berzerker Legions is quite unforgiving, and not always in a good way, so it suffers for the same reasons records by Diabolic, Krisiun or Malevolent Creation often fall into systemic dispassion...the real lack of a distinguished or resonant atmosphere. To this point, granted, the Danes had only put out two records that weren't exactly bastions of depth in songwriting, but this one further cemented them as third or fourth stringers on the European scene, and it just lacks the character of the better efforts. It could really use some great lead sequences or pulverizing breakdowns to help break up the speed. That said, it's a real neckbreaker and not at all a bad album to pick through if you really value intensity and couldn't care less about subtlety or song diversity. Beyond the intro it goes into nuclear overdrive, nothing nuanced or unique ever happening, just a load of repetition that makes use of Killerich's speed without ever teaching us why he's this fantastic, up and coming drummer beyond his ability to batter away for a half hour. And that's frankly just too much for this to match any of the other Exmortem full-lengths, and coupled with the forgettable cover image of bursting, incendiary bodies, its reasonable why this seems to have been entirely neglected.