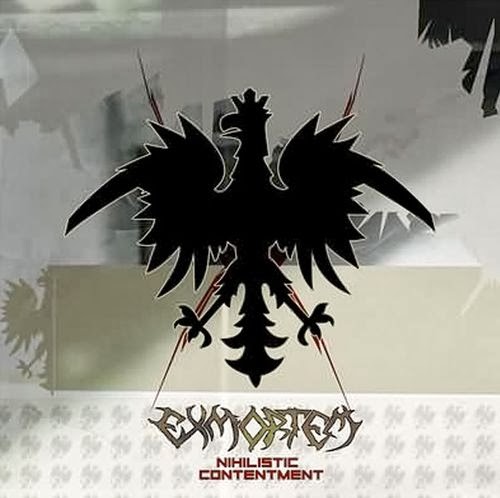 If Nihilistic Contentment suffers from anything at all, it's that the album seems to settle for being a perfect hybrid of the two before it. That's not to say it's at all bad, quite the opposite; it simply doesn't bring anything new to the formula, with the guitar tone jerked straight off Berzerker Legions and the more interesting, adventurous riffing of Pestilence Empire. But for those potential listeners who might have found the fourth full-length to be a little murky and ominous in production, this is a far more brazen boot to the ass with a lot brighter tones and perhaps a more equivalent mesh of drums. Which is a good fit for what might have been their highest profile recording to its day, out on Earache's fledgling subdivision Wicked World which had once scored great efforts by new blood like Decapitated and December Wolves. I was pretty happy with this when it first came out, but as the years pass it simply doesn't stand to memory as much as the records which bookend it...it's quality enough to add to that impression that Exmortem was a truly consistent band, never once plunging into the mediocrity that hovers over the death metal underground like a cloud of smog...too bad more people just weren't paying attention.

Just because I don't hold it in the highest esteem of the Danes' career, don't mistake that for lacking some substance. In truth, the weirder riffing passages that shone through on Pestilence Empire are even more pronounced amidst the blasting surges. It may have (and remain) the most thoughtfully composed album they put out, and it often reminds me of a mix of Morbid Angel's Blessed Are the Sick and Covenant with a bit of Gorguts' later 90s absurdity circa Obscura. There's a lot going on at any one given time, and Smerte really varies up his own vocals with a mix of the guttural barks and a harsher, higher pitch that resonates more with what he does in Horned Almighty. Variation is paramount, with a pretty even range of full on blasted components, zipping and zooming atmospherics and slower, amorphous grooves which are loaded with deft and seamless double bass patterns. You absolutely get a lot of that sliding jerkiness (i.e. "Symbols of Inhumanity") found on left field death metal recordings where the constant transitions were well-meaning, it's not exactly random placement but you do feel like you'll be getting into one part and they're off to another before it fully develops. Still, Nihilistic Contentment seems like the most technically ambitious of their outings, even if the techniques just seem to be emphasized from particular tracks on its predecessor. It wasn't necessarily anything 'new', but they were clearly attempting to open that tear in space/time and make it such.

Actually liked that weird, jarring percussion/piano interlude "Swamp of Decadence" and wished it were longer, or that they would have promoted similar atmospheres elsewhere on the album, which would have certainly made this stand out more against the crowded genre in which it got lost. Production-wise, while my own preference might be for Pestilence Empire or their swan song Funeral Phantoms, this was the record that most death metal or brutal metalcore fans would most appreciate. The meat of the rhythm guitars is just dripping with fatty juices, and the more intricate guitars feel coiled, springy, and organic, very much in line with Obscura or From Wisdom to Hate. Bass is likewise voluptuous, while Galheim's drums here are just unbelievably tight and one of his overall better performances; bittersweet, because it was his last recording with Exmortem, but he certainly didn't let his bandmates down. Nihilistic Contentment is just this really tightly wrought showcase for the entire band, if they had gone further into atmospheres or written the tunes just a little more strangely, I'm sure it would be talked about alongside your Gorguts, Immolations, and Ulcerates, though the Danes wouldn't ultimately dwell on this specific sound. That said, definitely not a boring ride here; better than Dejected in Obscurity or Berzerker Legions and worth tracking down if you skipped it upon release. Six good albums, some a little better than others, not one a disappointment. Exmortem. May they go down in history with a little more respect than initially received.