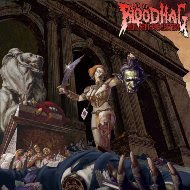 Let me preface this by saying this has got to be one of the coolest ideas for a band ever. They perform a sort of geek grind. Every song title is the name of a science fiction or fantasy author (and usually a great author), the band performs tours in libraries...and they throw out free science fiction books to the crowd when they perform. Of course, this is on the West Coast so I am basically fucked out of getting to participate. But still...how fucking cool is that? I am sold.

As far as the music living up to the concept, I am satisfied to say that it's actually pretty good. They perform a hybrid of death, thrash, grind and even a doom atmosphere. "Robert Silverberg" rocks out with a great thrashing death/groove salvo. The vocals are creepy, they almost remind me of Rigor Mortis but with some snarlier Carcass style thrown in. "James Blish" is another thrasher with some bewildering grind breaks. "Iain M. Banks" is a slower, sludge tune with some stoner groove to it. "Madeline L'Engle" is more than she ever deserved. "Frederick Pohl" is a total raw thrashing groove. The tone across the album is raw and direct, basically as if they just plugged in and recorded it.

Job well done, and a concept that is difficult to top. A great and unique signing for Alternative Tentacles. How this band ever eluded me before must be a testament to the fact that this world isn't as small as we think. Now I am FORCED to track down their debut Necrotic Bibliophilia, and watch closely for any future news and possible live dates in my area. Amazing.

Thy wish is my command.