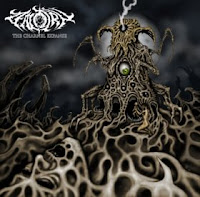 Ever a pleasure to discover a band like Zealotry haunting the New England underground, especially in the death metal niche, which I've honestly never found to be particularly strong around here. Sure, we've had some local heroes to cheer on in the past, and we've got a few at the moment (Abnormality, Revocation, etc), but The Charnel Expanse is something positioned at quite the right place and time: an old school exhibition which never shies from introspection, atmosphere and most importantly, a higher plane of musicality you just don't expect from your garden variety Incantation, Entombed or Autopsy clones that have admittedly helped rekindle an interest in the sounds of the genre's grade school years. Zealotry takes chances, and the band's full-length debut allows each of its constituent instruments to breathe witchery into its arcane whole, plus the cover looks like a squamous send-up to Cryptopsy's Blasphemy Made Flesh, or at least a handmaiden of Lloth...

The obvious comparisons conjured by The Charnel Expanse would be Immolation's first few albums in the 90s, with perhaps a helping of the less blatantly groove-infested riffing off Demilich's Nespithe, but more recent parallels could be drawn towards Canadian acts like Mitochondrion or Antediluvian or a hint of the more structured Portal material. The music is quite complex in its phrasing, tempo shifting and peppering of techniques like harmonics, squeals and splaying out the individual notes of chords as a counterpoint to the more rampant manifestation of the other, driving rhythm guitar. Variation without loss of cohesion, and plenty of creepy segues coursing through the album, like the strangely addictive clean guitars opening "Blighted", which are an excellent dynamic digestive aide for those turned off by incessant onslaughts. When I mentioned 'old school' earlier, I was referring more to the 90s school of thought, when the genre was evolving through the musical proficiency of its practitioners...The Charnel Expanse is far more demanding, for example, than the rudimentary, evil tremolo patterns or bludgeoning grooves used to anchor classics like Death's Leprosy or Obituary's Cause.

No, it's more catered towards fans of records like Here in After, Obscura or None So Vile. As such, a brazen, ballistic and ranged performance is required of the rhythm section, and it is given, with the drums in particular standing out in the mix. A few fills seem to fall flat in the context of the motion of the riffs they are accommodating, and there are occasional stock blasts alternated against the more interesting mid paced riffing or grooves, but it's one of those albums where I feel like I could shut off the vocals and guitars and still enjoy listening to this guy batter away. Same could be said of the bass, which is a little deep in the mix but every inch as nimble as the rhythm guitar, with some nice effective deviations from the centric progressions that help justify its independence (for example, I loved its zipping and bumping beneath the leads in the track "Decaying Echoes"). Leads are also a standout component of this record, both flashy and atmospheric enough to enforce the otherworldly lyrics and imagery of the band's cosmic and philosophical schemata, and giving the recording just that much more overall depth.

The Charnel Expanse was not crossed in a day, and the effort applied by the musicians was obvious from the first few fell, majestic note progressions that herald "Avatars of Contempt, pt. I". There are a handful of transitions through the record that I felt could have been tightened to greater effect, where the volume of ideas and execution almost suffocates itself. Also, the leverage between the two simultaneous rhythm guitar tracks seemed a fraction unbalanced so that it could be slightly difficult to pick out the nuances of one over the other...but then, I've got to admire just how much work was put into their coexistence. The only other gripe I had was that some of the dual-layered guttural vocals were slightly overbearing, and that I preferred when just one growl was emitted since there is just so much happening musically that it could become a bit claustrophobic to include more. But as a paean to the madness of social and moral decay, all of the pieces here do ultimately fit the puzzle, and Zealotry has got itself quite an engrossing experience which holds up through a large number of listening sessions. The lyrics are thoughtful, and many of the riffs fantastic. Expect a great, reality-warping future from Zealotry. First, we Massholes hosted Miskatonic University, and now this band. No pressure, gentlemen!