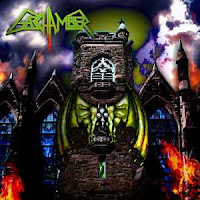 With a provocative name like Gaschamber, you've really got your work cut out for you in sonically living up to it, something that this Pennsylvania trio did with their eponymous, obscure debut back in 2002. Granted, the album is little more than glorified Slayer worship, with song structures, vocals and even production choices eerily reminiscent of the masterpiece Reign in Blood, not to mention the faster elements present on South of Heaven and its successor Seasons in the Abyss, but if you're going to borrow...do it from the best, right? And I'd definitely point out that while there were always a handful of throwback bands in the 90s and early 'oughts who were also quite derivative in keeping the fire burning for the nearly defunct genre, Gaschamber was well ahead of the trending rethrash that has blown up over the last 6-7 years. It had been done before, but this was violence, speed, cruelty and an absolute lack of apologies...without the goofiness or image obsession that seems to make light of a genre that, apart from a few retarded gimmicks from bands like M.O.D. or Anthrax, was not in league with the irony some youngsters seem to believe.

Gaschamber is short and wastes no time getting to the point, with eight tracks in 24 minutes, a technique its mentor Reign in Blood mastered in the mid-80s. The songs are ALL fast without being excessively samey, and you're not going to have to suck up some ballad or worry about any experimentation. The guitars are a bit juicier than King and Hanneman on that iconic release, but they definitely cultivate that same sense of dry authenticity, not too harsh or distorted, but vibrant and thick enough that you can perceive all the acrobatic speed metal-inflections of the rhythm tracks ripping and racing all over one another. The vocal timbre and meter in many of the tracks (like "Defeating the Gods" or "Death in the Gaschamber") is highly reminiscent of Tom Araya, but this guy Karl Mitchell definitely sounds a bit more youthful and petulant, with a splash of more splatter- or crossover thrash frontmanship in there. But, clearly he's barking up that same tree, and a lot of the lyrical themes of genocide and warfare will naturally recount classics like "Angel of Death" in more ways than one; though something like "Trenchcoat Justice" helps update the topics to incorporate the social strife and mayhem of the early 21st century. Samples and vocal effects are used sparsely but tastefully, and I definitely never grew bored on any of the eight tunes, despite the glaring sense of familiarity.

The bass guitars are thick and quick but rarely stand forth from the rhythm riffs, though with Mitchell already performing vocals and other guitars, one can sort of forgive that lack of attention. At least you can hear them cleanly enough in the manic and pestilent thrashing of a "Hurricane of Blood" or "Raped to Death", and certainly there is more personality than a number of 80s discs I could think of, especially the punk/hardcore attitude they're given on the intro to "Civil War". Drums, on the other hand, sound pretty claptrap, organic but there's just something about the boxy snare that tends to distract me, and the tom fills can occasionally feel a bit too bulky. But you can't really fault the level of enthusiasm or energy there, and the beats are all fairly standard explosions of earlier Dave Lombardo which don't rely too heavily on the extreme metal drumming techniques (blasting and endless double bass) that Slayer helped pioneer. The leads are just as rough and frenzied as their spiritual successors on Reign in Blood, without wiring in a lot of cohesion or classical/scale influence, but they don't emotionally stand out from the supporting rhythm guitars too often, and internally rely on a lot of the same tremolo repetitions of notes, not taking much of an opportunity to rifle off the spurts of screaming, incendiary wizardry one might hope for.

Ultimately, the album is not a particularly great or memorable one, but it functions because of the timeless alternations between tight picking/sheer velocity and those gnarly, evil ascending or descending break riffs that Slayer or Destruction made immortal on tunes like "Raining Blood" or "Mad Butcher". These just don't get old, even if I have to give Gaschamber low marks for innovation or originality, and never feel compelled to listen to it over the genuine articles that inspired it. I'm loathe to call it a 'ripoff', since note for note it is not, but they were more than wearing their influence on their sleeves, and enjoyment of this lone album in their career will really depend on whether or not one wants to hear the 'magic' of 80s Slayer (post-Show No Mercy) resurrected, repackaged and force fed down your ears with a mallet. If the answer is yes, then try and locate a sample of this disc. Gaschamber, at the very least, had great taste, even if we'll never hear what they might later evolve that into. At least this album is blissfully void of the 'HEY U GUYS LOOK WE R SO THRASH' strike-a-pose bullshit that's due to send this excellent genre back into a state of hibernation for another 15 years.