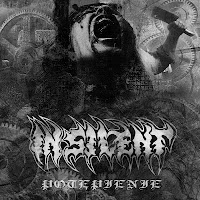 With only 22 minutes and seven songs, Potępienie is not an extended vacation at the graveyard, but in such a short time I must admit that they deliver a pretty thorough, hammering exhibition of their skills without a lot of arbitrary repetition that the listener must sift through. The riffs are legion, and even if there aren't a whole ton of them that stuck with me well after the experience, these seemed like a pretty earnest attempt to graft together some memorable note progressions without directly receiving tutelage from any one influence. In other words, it's more busy and technical than most of the trendy old school death I've come across lately, and more reflective of what Polish masters like Vader can accomplish. The blasting is delivered at a pinpoint precision, and this guy has effortless hand and foot strength and speed to build a proper basis. As almost a contrast, the rhythm guitars have a bulky, fuzzy distortion which is felt more in the crunch of the slower riffs but miraculously manages to hold up when they're flying along at light speed to a blasted segment...

It is in those particular moments, like the lightning thrust of "Potępienie" itself, where you begin to feel the slight black metallic influence in the dissonant chord selection strewn over the blast, but the dryer melodies they spray over the din of destruction are definitely more like what you'd find out of early death metal. As for the vocals: nothing out of the ordinary, but a raucous guttural with good sustain, peppered by impetuous rasps to create that hybrid effect which has been popular since the late 80s, though this is more like a Deicide meets Tom G. Warrior approach than a Carcass one. Bass guitar is in there, but sometimes I felt like I was struggling to hear it against the meat of the rhythm guitar, it blends in pretty often and isn't given a chance to shine in the mix, though the guy is pretty good (and shares vocals with one of the guitarists). For the most part, though, the production here is well balanced and forceful, blunt and brutal and really gets the message across like a piledriver on tile flooring.

Ultimately, I wasn't in love with this record musically, but not for lack of effort, and the band does pull of at least a dozen neck-jerking riffs in a brief time that show to me what they're capable of meting out. At the very least, I'd say that fans of Polish black or death metal brutes ranging from Thunderbolt and Infernal War to Vader and Hate might find a lot to enjoy here, or US hordes from Vital Remains to Diabolic. Assuming, of course, that a listener doesn't mind the lyrics in Polish (I don't at all mind, though I couldn't understand them apart from a few song titles and select words). This is concise, compact, and indisputably brutal, but it just didn't leave a huge impression on me apart from the one on the back of my skull, and part of that is probably just because I've heard its like so many times; but it's decent.