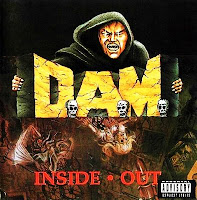 1991. The Black Album. Thrash Armageddon. Armed with a cover art that was arguably worse than their debut album, and one of Andreas Marschall's worst, England's D.A.M. waded heroically back into the fray to seek redemption one last time, before getting their connection to Noise Records and stardom severed forever. And would you believe it? They actually, as far as these things went, surpassed themselves with room to spare, tightening in on the riffcraft and overall songwriting to create a respectable justification for their existence. No, this is not the sort of cult classic you need to bust out and bloodhound immediately (though a recent 2012 reissue ensures you can do just that if interested), but I admire that D.A.M. managed to refine themselves without at all changing course from where they were on the debut, and even if it was too late to really make a difference, since the genre was coming off its incline to the decline, they can listen back on this with some pride.

First, Jason McLoughlin's vocals here are dramatically improved, focusing in more on his higher range and shrieks successfully to create a sort of wretched wickedness somewhere between David Wayne, Eric A. K., Leszek Szpigiel and Bobby 'Blitz'. The guy is generally a pleasure to listen to throughout the album, often shrill, spectral and haunting when he hits his peak, even if a few of the lines become repetitive during verses. Also, the approach is a better complement to the music, which has taken on a more desperate, melodic presence through a more memorable selection of riffs. They still implement a lot of mid-paced muted picking as the norm, but the deeper chords and chugs are measured off against a more clinical sense of harmony, while retaining the solid ear for lead-work that was one of the few positives off the debut...hell, these are even better structured, like the solo through "House of Cards" which actually carries some emotional depth. Honestly, the record is so piercing and melodic that it flirts with power/thrash territory, not as technical or nuanced as something like Toxik or Realm, but the angry riffs and vocals might certainly appeal to fans of groups like Apocrypha, Sanctuary, (early) Hexx, Toranaga, (late 80s) Fates Warning, Vicious Rumors and Metal Church, especially on the moodier pieces like "Winter's Tear".

The rhythm section is likewise stronger here, with more reverb and power behind the drums and a lot more meat on the bass to help distinguish it from the rhythm guitars. That's not to say the beats are necessarily aggressive or demanding, but the mix alone ensures they feel more exciting alongside the other instruments, and you'll feel every stick clap in your ear and kick rumble in your colon. Inside Out does occasionally lapse into some bland riffing patterns, and a few tunes (like "The Innocent One") are outright hit-or-miss, but even the worst material through the hour of content (assuming the CD 'bonus tracks') is superior than sitting through the drab, insipid slog that was Human Wreckage. Lyrics are meek and topical, with songs about domestic violence, abortion, etc, but like the first record, generally no worse than a lot of the other second or third tier thrash acts (especially from the US).

This is not a perfect record, not even a great one, but there's this vibrant, constant notion of 'this is our last chance, let's go for the posts' that pervades the experience. Score! Though I admit I grabbed this out of a bargain bin for about $2 US a few years after its release, having no faith or expectations and just wanting it for my collection, I remember being almost floored at how the band had upped the ante. Hell, if they had released a third record with a comparable, incremental rise in quality, they might have created a bonafide, timeless classic on an ailing British scene. Bittersweet, because yeah, too little, too late, but at least they've got something to smile about, as do those of us in the limited audience. En garde, 1991.