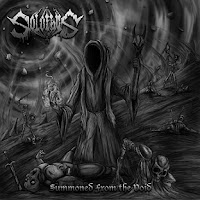 At the risk of juggling semantics, one of the factors I found most compelling about Solothus' 2011 demo Ritual of the Horned Skull is just how much the 'doom' half of the doom/death equation plays into their actual construction of riffs. Pure, sorrow-stoking and gut-churning Sabbath-ian riffcraft above which the 'death' manifests as a guttural narrator with a deadpan dictation that feels like someone digging up your corpse and then repeatedly kicking your tombstone over onto your unwary remains. It wasn't just boring, slowed down death metal chord progressions with ominous, cavernous growls, but actually groovy and depressing in the tradition of bands like Candlemass or (earlier) Cathedral, albeit with the difference in vocals. Thankfully, the Finns have kept this formula intact for Summoned from the Void, their full-length debut coming out through the Spanish label Memento Mori.

Certainly this is crushing enough to tide me over until the next Hooded Menace record, but where Lasse Pyykkö's project is imbued with more of a camp classic horror kitsch to it, and employes more distinctly melodic riffing techniques, Solothus are brooding and bleak. At their perkiest, they'll erupt into a total old school death metal tremolo picked progression amidst the roiling low-tuned chugs and grooves, but holy fuck do they keep this shit HEAVY. There are subtleties among the generally lengthy cuts, especially the second guitar which often hovers at the edge of perception with cleaner picked notes or harmonies, but somehow they manage not to put me to sleep even with the straightforward palm muted pressure applied through a piece like "Plaguewing". Simple, atmospheric leads just explode over the facade of the chords ("Magus of Doom" has a measured ripper in there), and the listener is never allowed to escape the oppressive murk of the mix, or the steady, dirge-like drums interspersed with toms and monolithic tribal fills.

Bass is definitely 'felt' on the album, but it's not creating a lot of harmony or interesting depth below the rhythm guitars, something that might actually spice up the writing more with some fills. That said, when the layered growls nail you with that stereo effect, like simultaneous emanations from several alcoves in a sepulcher long abandoned by the living, and the guitars are drudging below, all the sunshine disappears instantly and you feel like you've got a gaping stomach wound and have to drag yourself around in agony. So, in other words, Summoned from the Void works as intended, and this is a positive step for the Finns with a truly negative, tunneling atmosphere that death/doom purists will truly appreciate. It's not amazing, perhaps, but with it grabs you immediately with the harrowing organ intro "Frostbane Overture" and then never lets you escape into the daylight again.