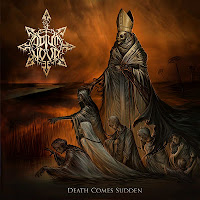 Young, talented, and interminably ambitious (perhaps to a fault), Odium Nova offer us a pretty unique interpretation of the melodic death metal/ symphonic hybrid which is at the very least going to burst them onto the radars of those interested in polished and dynamic modern death with absolutely no shyness in terms of incorporating keyboards and pianos. I believe a direct comparison to any one precedent might be difficult, but I feel like this is somewhat of a spin on the Finnish formula of groups like Kalmah or Children of Bodom, only with a tinge of Amon Amarth's propensity for deep growls and driving, simpler guitar progressions; and then maybe a hint of Septic Flesh, Stormlord, or another Moscovian act you may know, Mental Home, in the use of sweeping but measured orchestration.

Of course, in a world so presently enamored with old school, dirty death metal, a record like Death Comes Sudden is anathema, but I think there's quite a lot of crossover appeal in what they write, perhaps to the Gothic metal crowd, aforementioned Finnish melodeath scene, the popular pagan/folk metal acts hailing from Europe, US groups like Alestorm and Blackguard, or even symphonic black metal stalwarts like Dimmu Borgir, Cradle of Filth and Chtonic. These Russians just capture that much of a range in the staggering 17 tracks of their full-length debut, but it's this very overwhelming scope of the album that also causes it to suffer from some inconsistency in effectiveness, and to be truthful I think it might have proven superior with just 9 or 10 of the better tunes packed together into a more concise exhibition of the band's strengths. That's not to say that the weaker tracks here suddenly fall off some steep incline of quality, and in Odium Nova's defense you're getting a broad range of stuff here, from straight riff-based ragers like "Paradise Sold" (a power metal and melodic death bastardization) and "Private Gehenna" (almost a rocking black/thrash) to "Sunset Over Styx" and "Hecatomb" which are more eloquent due to the keyboard arrangements.

The mix of the album is incredibly clean, if not entirely resonant. Rhythm guitars have a lot of punch but their particular neutered sense of saturation can lead to the subjugation of the riffs by either the keyboards, vocals, or more sensibly, the lead melodies and harmonies which are basked in brighter effects. The bassist is given plenty of space to breathe, and thus he's not always stuck to the rhythm guitar, and the drums performed with a mechanical precision that includes plenty of double bass and other mandatory techniques, even though they never really rise to the fore of the songwriting. Pianos are perfunctory but occasionally memorable, and other atmospherics like choirs and calmer clean guitar passages are strewn throughout the 55 minutes of content to help balance off the harder, driving sequences. Vocals are everywhere, from a deep guttural growl to a more Carcass-like snarl; nothing quite original, but effective and well structured to the verses and chorus progressions. If I had to pick one area that shined above the rest, it's got to be the lead guitars, which are very polished and balanced between flashy technique and emotional impact. Maybe not unique, but they certainly show a lot of effort there...

As tastefully executed as the atmospheric/symphonic based tracks are, I actually found myself siding more with the brutally inspired tracks like "Crypt of Fatal Truth" or "Human Larva" which feature a bevy of  precise, exciting, death/thrash riffing. But ultimately, I think if you're going to hammer us with 17 fucking songs, it's best that they show a broader palette of ability, which Death Comes Sudden clearly does. This record was clearly a labor of love, perhaps biting off more than it could chew, but revealing that there is probably no limit to what Odium Nova will be capable of, if this is so early in their career. They formed in 2011, after all...hell, most bands couldn't write something like this after a decade. Even the lyrics are pretty goddamn solid and interesting. Is it mind blowing or intensely memorable? That I can't promise, but I was definitely surprised to get a recommendation out of left field for something I'd never heard of that was this fully realized. Fans of anything I mentioned in the first two paragraphs might wish to give this a whirl, or lovers of modern, hygienic extreme metal which splits its attentions pretty evenly between the graceful and grotesque.