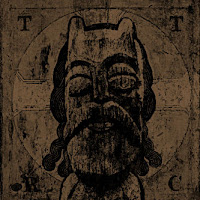 Apart from its mighty death metal armada, which has long ago achieved international notice thanks to groups like Behemoth and Vader, Poland also harbors a less outspoken black metal scene, a slice of whom could be considered to toil around with the genre and offer some atonal, mildly experimental variations on the theme. I speak of groups like Furia, Non Opus Dei, MasseMord, CSSABA who take a slightly left of center approach to songwriting that translates into a more memorable listen than if they simply blended in to the bulk of European black metal acts in impersonating the Scandinavian forebears. While not yet at the same structural or conceptual level as those I just listed, Túrin Turambar offers us a very flexible, almost jammed out selection of black metal or black/thrash bastard riffs which shifts tempos often enough that it's simply not your usual volley of dissonant black metal blast beats, and there's a real sense of 'exploration' as you listen through the track list, even if a lot of the actual progressions are primitive and aggressive, rather than atmospheric or haunting...

However, there are exceptions, like the intro to "Jazda", which is a sparse, jarring landscape of dissonant notes set over grimy, distorted bass guitars, or "Więzienie z kości" where some harmonics and jangling cleaner guitars strike against some drum grooves, which feel almost like the band are improvising, Or a piece like "Rok olimpiady" which has a heavy, drudging rock architecture with some spy-like bass structures, and "Autodefenestracja" where it's more of a direct, discordant slew of chords. Here the band almost entirely escapes the 'metal' brand, and where Túrin Turambar begins to flirt with the unusual, at least in terms of its parent genre. Elements of jazz, alternative rock or post-hardcore creep into the framework, not to the extent of something like Italy's Ephel Duath, but enough that it's clear these guys are drawing upon more than one bag of tricks. Unfortunately, I felt like a lot of the ideas were only half-formed, and that just in selecting some left field chord choices, they don't necessarily assemble them into a memorable product for the listener. So in truth I actually found the more intense metal sequences to be the superior points on the album.

Biggest problem, though, is the production, which is more like a rehearsal session with a recorder running than a polished studio outing. Which wouldn't be an issue other than the levels felt a little unbalanced. For one the guitars are just too loud, boxy and bulky for my liking, even if I can constantly understand what they are playing. Same goes for the bass guitar. The drums are more modest in terms of volume, but I did not like some of the individual sounds like the snare. The vocals are really raw, with a harsh and nihilistic bark that might have benefited from a fraction more reverb, though the guy can sustain a snarl well enough on his own. All in all, it's definitely loyal to that jamming vibe I mentioned earlier, which is probably cool for a listener who loves live recordings, or rehearsal demos, and I also think it's pretty honest...but Túrin Turambar would sound a lot cooler if they went wilder with spacey effects and atmospheres. Rzeczpospolita Czartowska seems 'strange', but not strange enough if that makes any sense.

At any rate, the album was at least not one you hear every day, and this sort of unfiltered artistry is not unwelcome in my book. I'll say one thing: I had no idea what to really expect next, since a lot of the tunes throw you a curve ball in either the intro sequence or during a bridge. As far as black metal, or thrash and groove riffing, they're not incredibly creative, but also not so bad. Some of the sparse death metal styled tremolo riffs were bland, but nothing here is repeated unto oblivion to where you can't stand it. I was probably most mesmerized by the final tune, "Deszcz III" with its sampled precipitation, ritualistic guitar rhythm and the pounding drum of the intro, but there are definitely a lot of 'what the hell was that?' moments that prevent it from becoming monotonous. A curious sophomore, but they should crank up the oddity and atmosphere.