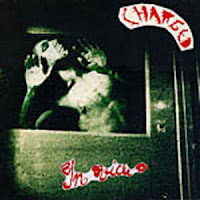 I think it's understandable that many metal fans at large became familiar with the Finnish scene through either its death or black metal scenes of the 90s, or perhaps the Gothic metal explosion that was headed up by acts like H.I.M. or The 69 Eyes. All had a far higher visibility than the country's thrash or trad heavy metal output from the prior decade, and personally I found the stuff pretty hard to find. Oz' Fire in the Brain, Tarot's Spell of Iron and the first three Stone records were about the only things I could find as a teen, until I was posthumously introduced to the obscure trinity of Antidote, A.R.G. and Airdash, who put out a handful of good albums. Certainly, though, this was not a place known for a prolific thrash subculture (like Germany), so in the years since its been a quest of mine to track down any obscurities I can find from the area, like the fantastic Vantaa act Protected Illusion who are the very definition of a 'diamond in the rough'. Charged is another I've come across, an unknown who were playing an answer to the style of speed/thrash popularized by Metallica in the mid-80s with Ride the Lightning and Master of Puppets...

...and In Vice is clearly honoring that influence, especially in the formation of charging guitar riffs embedded with the dense muted picking. Tracks like "A.C.N.R." and "Firedancer" sound more or less like outtakes from those very albums, only given a bit of fiery radiation circa later 80s Nuclear Assault, and rougher sounding, everyman vocals more reminiscent of other Metallica-inspired thrashers like Boston's Wargasm and Meliah Rage or England's Xentrix with a fraction more of an impish/crossover splatter. In fact, this is quite like a composite of Why Play Around?, Kill to Survive and Shattered Existence, and anyone heavily into those records would probably derive the most enjoyment out of Charged's well-meaning but ultimately unambitious effort. That it sank so quickly into the slushpile of the sub-genre doesn't really surprise me, since few bands after '88 were really able to cash in their chips for an enduring legacy in the medium, and this was on a small label with zero promotion (I at least don't recall reading about it or seeing ads in my magazines); but In Vice captures the time and place of its inspiration well enough that I'd easily trade in a bunch of half-rate teen thrashers of the 21st century aping Exodus and Anthrax for another listen. Hell, the fact that it's a 'one and done' effort for the Finns gives it a sort of fatalistic appreciation, like you're discovering it in an attic of broken or abandoned dreams.

Hi-octane, meaty speed/thrash riffing progressions rule the roost here, void of any real technicality but primal and pulverizing as they always were, and tunes like "Surprise Kills", "A.C.N.R." and "Surgery" are admittedly viral enough to flood the valves with teenage testosterone, especially the last of the three which has some cruel guitar tails/fills redolent of Vio-Lence, Destruction, Death Angel and Whiplash. They often break up such 'rush' rhythms with some more scalpel-liked melodic picking, harmonics or spotty cleaner guitars to provide a busier atmosphere, though they tend to shy away from notable leads which in my opinion can lead to an emptiness at the center of a 3-4 minute song moving at such velocity. The bass and snare drums are fitful and forceful, with the cymbals hovering just above the rhythm guitar and hardly stressful on the ear, just a 'ssssshhh' here or there that creates a percussive reverb. Bass guitar lines, on the other hand, are thick as swill, especially on a piece like "Inquisition" where you can make them out the most, yet they're not prone to carving out the most interesting strings of notes and are too often subsumed by the rhythm guitars. As for the vocals, I rather enjoyed the production, they have just enough filth to them, and some reverb that helps waft them up into the record's rafters where from where they mock and caution the listener.

For all purposes, In Vice is also a well structured effort where the speedier pieces are broken up by some mid paced pure headbangers like "Firedancer" and "Metal Eyes". They even experiment with a slower and moodier, but no less riffy 'epic' number in "Twisted in Vice" where the vocals are occasionally layered to create a more hazy atmospheric effect, though in that very same song some of the drearier lines sound like ass. In general, the note progressions are reasonably hashed out, I just think they suffer from a severe lack of creativity, and aren't good enough to stand out when bands like Slayer, Megadeth, Metallica, Paradox, Deathrow, Coroner, Artillery were producing such top notch, interesting material. If you were to line up Charged against, say, Rust in Peace, or By Inheritance, the more intricate and exciting guitars of those would make this look like a wheezing marathon runner nearly unable to cross the finish line. My enjoyment of In Vice started and ended with its nostalgia factor: this isn't bad by any means, and with additional years and records' worth of development they might have made a name for themselves...but it was just too late in the 'Golden Age' thrash cycle, and neither the band cared (splitting up after the album) nor anyone else.