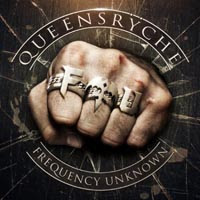 I'll play the devil's advocate here in saying that I actually don't mind the defiant nature of the cover artwork on this disc. Hell, I would have gone further, removed the album title and band name, and flipped the fucking bird! The icon and acronym would have been enough. After all, if Geoff Tate wants to persist in his delusions, why not go into an all out mental meltdown! The problem is that he just doesn't go that extra mile, and that no matter how belligerent or 'in your face' he wants us to imagine he feels right now, this album is entirely incapable of roaring past the finish line. In fact, it whimpers even attempting to pass the starting line when the gun fires off. Sure, it's predictable that the primary force in Queensrÿche's creative demise over the past 20 years would issue a stinker of a solo album when left to his own devices, but the real crime here is that he has surrounded himself with a virtual 'choir' of talented guest musicians and singers and come up with such idle results...

I'm going to ignore getting into the absolutely idiotic decisions this man has made in recent times, because Frequency Unknown fails entirely on its own demerits, without any historical context required. It's more or less a revolving door of guest solos, vocals and other session performances that ultimately ends up a fairly weak production with a slew of forgettable songs that aren't about to change anyone's mind that this guy has earned himself the shorter straw. Surprisingly, while Tate has given the impression on numerous occasions about how he has moved on from the metallic years of his alma mater, he opens this with a pretty straight forward muted riffing piece in "Cold", as laconic and lazy as it ultimately proves. Almost as if he wanted to prove to the world that he could still rock hard, but sadly it devolves into a standard rock chorus no more poignant or interesting than much of what he's released over the past decade, and not even near the level of numbers like "I Am I" or "Empire" when his former band had started to wane, but still held on to that edge of relevance through strong record sales and loyalist fans. It's not the only instance, either, since you've got the tune "Slave" with its brief spurts of speed licks and groove metal, and then some truly awful groove metal in the track "Running Backwards".

But largely, Frequency Unknown drifts around in context from textural melodic rockers to other bland commodities that probably wouldn't break regulation-rock radio-space even in a time when they might consider supporting a washout pariah from a once-famous metal band. Riffs are abysmal, never standing out on their own and at best just vomit-soaked rehashes of tired ideas with no fire lit under their asses. Organs and other instruments are used to dress up the atmosphere, and the bass guitar bumps along with a very deep but digitized feel, but neither area is particularly compelling. Most importantly, the production of the album feels as if its been glued together from a patchwork of piecemeal recording sessions he had to put together just to accommodate all his guests, who hail from everywhere: Rudy and Robert Sarzo, K. K. Downing, Ty Tabor, Brad Gillis, hell even Chris Poland shows up for a lead on "The Weight of the World". Yet the power chords sound pretty unconvincing, the shuffle of the palm mutes mediocre, and the drama of power ballads ("Weight"... again) overwrought and having no definable payoff in terms of melody or structure. With different people playing in different songs, Tate has crippled any possibility of consistency, except consistently sucking.

I could only suffer through a lot of the numbers here due to my own self-constructed obligation to give the records I cover a minimum number of cycles to properly feel them out, and even then I was compelled to cheat. What's even worse are the gimped re-recordings of tunes from Operation: Mindcrime and Empire. There are four of these bonus tracks, and they utterly fucking blow, devoid of the solidarity and formative power of their original incarnations. I mean, listen to that woeful guitar tone on "Empire"? What the shit is wrong with you people? How could, in any ordered and rational, cold universe, ANYONE think that this was a good idea? Did you not listen to these things before releasing the album, and decide to yourself "yeah, people are going to have enough of a problem with the crappy new originals, we'd better leave these off". It's this sort of misinformed decision making process that contributes to how rushed and pathetic Frequency Unknown feels as a whole, and I really hope Tate gets the message when no one inevitably gives a shit...

But what of Tate? How has his voice fared through this new material? I'd consider this the equivalent of a live performance with 'the actual Queensrÿche' over these last 10 years. He still has his range, a few chops, but he's obviously not as seamless and ambitious as his younger self. That the vocals aren't the worst component of this record is to his credit, but no way in Hell are they strong enough to carry such a forgettable selection of songs, and even in the lead-off single "Cold" the chorus seems to evade my mind after mere seconds. I mean, I'm not going to completely toot the horn of the Todde La Torre-fronted, eponymous new album from Tate's former business partners, but compared to this it seems positively inspirational. Goddamn, Mr. Tate, if you ultimately wanted a clean break from this whole situation, you should have put out a Timbaland- produced pop album (like your fellow Washingtonian crooner Chris Cornell) or gotten a strong songwriter to come in and build some strong, supporting hard rock for your vocal assets... Frequency Unknown doesn't cut it. Seek help, go and listen to your 80s output, and plead for an inevitable reunion tour/album. Or at least pull a Halford Resurrection. With this sorry package/entourage, you've only flipped yourself off.