The Unconscious Mind - Where Philosophers Fall (2012) 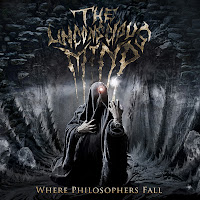 Experiencing a void of decent symphonic tinted melodic black/death metal of late? Quebec's The Unconscious Mind have your back with an effectively vibrant and destructive mesh of 90s style melodic tremolo guitar picking, sweeping piano overtures and progressive metal bass acrobatics that each twist through a series of thundering blast burst beats and meticulous, palm muted grooves which are delivered with the lewd punctuality of both modern death/thrash and metalcore timing (and I don't include that last reference with any sense of negativity). What results is an all-purpose assault which isn't particularly catchy or novel, but clearly the product of many long hours of calculation, composition and a severe chip on the band members' shoulders.

Angry and agile, Where Philosphers Fall is further proof of how metal musicianship in general has evolved. 15-20 years ago, you'd never expect a self-released debut record being written or performed at this level, and fuck, it even boasts some killer cover artwork. That's not to say that The Unconscious Mind are anything more than a pastiche of varied extreme metal styles that have risen or plateaued over that period, but they alternate between them with ease, and the range of the 50 minute debut is internally consistent, with enough symphonic/piano segues to break up the harsher content. Once in awhile, they'll lapse into a fairly generic mathematical chug sequence (like the bridge to "The Mirror of My Punishment") without setting up anything compelling, but more often you'll get at least an interesting fusion of notes and instruments. By far my favorite component of the record was the bassist...I could probably just listen to his tracks alone and be entertained, since he's got a lot of harried fusion chops redolent of groups like Cynic, Obscura and so forth, but the guitars also have a lot of surgical exaction that I also admired, and the black metal runs totally take you back to the heyday of Dissection, Emperor and early Old Man's Child.

The drums don't have a lot of character, but they exhibit all the appropriate brickwork and foot speed one would expect of this hybrid of styles. Perhaps the least impressive element were the vocals, which are a near constant pairing of snarls and growls that feels overbearing and monotonous like it would on a lot of similar, modern recordings in the realms of melodic death, metalcore or other, more insipid black/death hybrids. It isn't that the vocals are 'bad', per se, but they're simply never evolved beyond typical, and thus I don't hear a lot of passion or torment within them...I honestly preferred when it was just the more guttural style by itself. They also don't concoct a lot of riffs that really stick with me, but on the other hand there is so much happening that I was listening through the album a number of times and still picking out new phrases that just hadn't gelled in my brain previously. In other words, it's busy enough that it never becomes boring, though I could not choose out particular standout tracks that I wanted to keep re-listening through.

In the end, Where Philosophers Fall is a solid and exceedingly proficient debut for a band that likely will grow as songwriters as they conceive more material, but in the meantime more likely to thrill due to the contrasts of keyboard arrangements and pinpoint extremity. A curious combination of the mid 90s black metal boom and the sophistication of fellow Canadian death/thrashers like the popular Quo Vadis or maybe a few hints of older Neuraxis or Despised Icon. There are moments of inspiration and moments of retread coursing through the content, but it's clear to me that musicianship alone is not an issue...these guys can play circles around anything they desire, but this particular set of songs didn't really endure for me beyond the initial impact of their raw talent at stringing them together. Still, not a whole lot to complain about here, they are already quite seasoned and beyond ready for some label exposure.