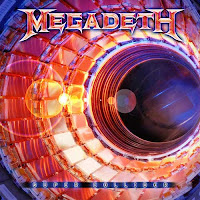 I think I'm at the point now where I hold absolutely no expectations for whatever Dave Mustaine thinks up next, because for nearly two decades now, it's never been a question of 'will this be mediocre or will it suck?' but rather 'just how mediocre, JUST HOW SUCK.' Sure, Endgame was a great time, but only because he saw fit to return to the record that blew the ceiling off Megadeth's career (Rust in Peace) rather than forge off into a compelling new direction. This guy is hands down one of the worst decision makers in the medium, which is a pity, since you have to admit that he has no issue morphing the band's sound to fit whatever whimsy he's got this year or next. In the proper hands, that can be a positive and potent trait for a musical franchise, but in Mustaine's it has become a piece of cheap putty that rarely takes the shape anyone in the audience would enjoy. Cryptic Writings, Risk, The World Needs a Hero, The System Has Failed, United Abominations, Th1rt3en, and now Exhibit G of the Megadeth Trainwreck: Super Collider, an effort which is so creatively misguided that I had to dial 911 for a pair of EMTs to come and jump start my brain again with electrodes. And so pathetic that it makes its superstitious predecessor almost triumphant by comparison!

It's a little bit late to write this off as a midlife crisis ('everybody gets one'). No, this is just outright weak. The Dave Ellefson bass lines that set up "Kingmaker" gave me a few seconds of hope that I was about to get my ass kicked, and then it all falls apart, with a track that is more or less a series of dull swaggering chugs that had me fearing a "Sweating Bullets II", busting out into a chorus that is essentially a rehash of "Symphony of Destruction" with the descending melodic chords sped up. "Super Collider" is a rock song with Pearl Jam bass guitars, angsty filtered vocals and the one bright spot being the first few seconds of the lead. "Burn!" is boring, effortless chug reduction with bluesy wah wah leads. I had complained on the prior album about just how insipid and uninspired a lot of Mustaine's riffing choices have become, but this takes it to a whole other level of miserable, with songs that couldn't have taken the guy more than five minutes to assemble. This is the same person we used to venerate as a guitar god...for fuck's sake, just listen to his playing on Rust in Peace. Listen to how the songs were crafted, the techniques employed and embedded into even the rhythm playing. Super Collider is more like a sequel to Youthanasia, only with that record the catchy choruses were legion enough to compensate for the simplified, slower pacing and rock structure of the songwriting. Not so much this time, where you'll almost never hear a surprise melody or vocal hook worth repeating.

One could definitely characterize Super Collider as a mix of Dave's hard rock influences (felt through a lot of the groovy picking progressions on tunes like the bridge of "Dance in the Rain" or "Built for War" (the latter having a slightly modern Metallica feel) with the 'bare minimum' of what makes a Megadeth metal track. They're not about to throw in the towel entirely, and remind us through the leads and occasionally a riff of the sleek and dextrous playing that built the band's following. But it's all for show...I never came away thinking it was integral for any particular song, and even when you've got a middling, inoffensive piece like "Off the Edge", Dave will go and cock it up with some generic layman lyrics that disintegrate any potential interest. A pity, because there are actually a handful of positive things I can say for the disc. The bass-playing, while not strong in its note choices, sounds voluminous and really helps round out the overall balance of instruments, so we know at least one of the members is 'performing', he merely needs better songs to work with. I would also laud the complete production of the record...it's modern, but fresh, in more ways than one an update to Youthanasia's concentrated layers of depth, rhythmic punch and brightness. Good guitar tones, lead effects, good vocal mix, and anything Shawn Drover applies a stick or foot to is clear as day, though he too is quite restricted by a lot of the predictable rock beats.

I'm also not going to write off the record strictly on the whole 'guest vocalist' debacle, with David Draiman of Disturbed appearing deeper into "Dance in the Rain", because: A) Who gives a shit!? I might not like his mainstay band either, but the guy genuinely digs metal and Megadeth, and was happy to be a part of this; and B) because the explosion at the end of that song, with Dave and David shouting vocals in uniform, is set to the best pure Megadeth riff anywhere on this thing. If there were a dozen or even a half-dozen more instances of this throughout Super Collider, it would have been a more pleasurable experience. But therein lies the issue: a moment of intensity and passion like this one serves only to cripple and leaden the rest of the record. At best, you're going to get a semi-catchy piece like "Beginning of Sorrow", the strongest overall use of riffing and melody with the nice male/female backing choir chorus, and a structure that reminded me of what I enjoyed off the Countdown to Extinction/Youthanasia era. On the other end, you'll get "The Blackest Crow", where the idea is to dress up some very boring, basic crunch riffs with a fiddle intro and outro to create a 'country Megadeth'. Gosh, man, you are so eclectic and open minded that it tickles me! The cover of Thin Lizzy's "Cold Sweat" is passable, I suppose, but I just wish most of the originals were actually heavier than this...

In another, just world, records like Risk and Super Collider would have been branded as Dave Mustaine solo efforts, dicking around with mainstream rock and hard rock music, blues or whatever he felt like and not polluting the joy that was once Megadeth. Granted, I am not now or ever opposed to a band experimenting with its sound for any reason if the end result is good music, but Mustaine has yet to prove to me that he can pull it off with any lineup. You might 'outgrow' thrash and speed metal, sir, but you'll not surpass it with the likes of this unmemorable tripe. Super Collider is a bargain bin effort before you've even hit the cover tune, with often middling lyrics and even more unimaginative music that simply can't be ignored because he threw a cello here, or a fiddle there. It's also, unfortunately, the worst Megadeth record in 14 years, second only to Risk in serving as rock bottom for their entire career. The twist is that there are a good 5-7 minutes of ideas here that serve as a painful reminder to just what we're all missing out on when this man is not on his game. Vic turned his back on us the last time, and now he's nowhere to be found. Frowny face. I might not be holding my breath for another masterful record like Peace Sells... or Rust in Peace, but some part of me still believes in your musical ability, Mr. Mustaine. We don't need "Holy War 2" (you already did that), but for the love of whatever God or philosophy you're following this week, stop fucking around and KILL US WITH RIFFS.