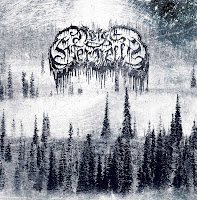 Neige Éternelle is a Quebecois black metal act which seeks a dialing back of the clock's hands to both the attitude and aural aesthetics of the earlier second wave black metal of the early 90s, characterized through a
sense of reductionism in production values that is responsible for both its stylistic parameters and icy, effective atmosphere. The band is well aware that that its intentions not to expand or complicate its medium, and thus settles directly into a sinister, distant and surprisingly elegant set of songs which I've found rather difficult to stop listening through. Having gotten a number of good promos via Montréal Sepulchral Productions lately, I can say that with no uncertainty that this was my favorite, and it scratches an itch I get every few years for the basest of black metal, steaming its open wounds out into a frost-tinged eveningscape, silent but for the howling of winds and wolves.

Naturally, my first comparison would be to Darkthrone's A Blaze in the Northern Sky, largely because it was the first album I owned to successfully dole out such an uncompromising, frigid atmosphere, but the marginally more melodic underpinnings inherent in Neige Éternelle's chord choices are actually more in league with Under a Funeral Moon or Transilvanian Hunger, De Mysteriis dom Sathanas or the first few Burzum outings. A melancholy captured in shards of ice, kept in a distant din beneath the drumming and the sustain of the vocalist's substantial rasp, like you were hearing it all performed half way across a frozen lake from an unheated cabin on the shore. The actual structure of the chord progressions is nothing novel, but doesn't really need to be...its nuance is strictly in its ability to cling to the listener's psyche like the uncertainty of surviving a blizzard in a primitive shelter void of modern amenities. To their credit, though, they mete out a fairly varied palette of riffing techniques which help this from falling into the quicksand of ceaseless repetition; "Comme une charogne" operates off eerie, mid-paced chords with a spiky emphasis on the higher notes in their respective chords, while "Fier patriote" incorporates some moody speed/thrash metal picking, or "L'appel de la mort" is your full-on, desperate blasterpiece.

But, while I enjoyed the writing, it's really the production that sold me on this eponymous debut, helped in part because I received this during the opening notes of summer, when the New England heat begins to swelter to a degree that I have simply never found comfortable (though I've no doubt many would consider it 'mild' at worst). All the instruments are audible, but never 'up front', if that makes any sense. The snares and crash along like an old Bathory disc, the double kick lines often feel like a bunch of rowdy fans thundering the bleachers during a hockey match, and the vocal sneer is constantly raving like someone stabbed and isolated in the woods, whose pleas may or may not reach the neighboring village. Granted, the actual timbre of the rasp is admittedly monotonous, but here that serves only to help distinguish the rhythm guitars and the sordid plunk of the drier bass guitar tone propelling alongside them. Feedback and subtle storm atmospheres greatly influence the direction of the music, as in the intro to "Pluie de couteaux", in which some dirty 'clean' patterns set up a dreamlike precipitation that really lives up to the band's name.

Ultimately, Neige Éternelle was an exhilarating 40-minute indoctrination into a genuine realm of suffering that I so rarely experience of late, perhaps due to some jadedness with a lot of the derivative works fielded in this niche that are ineffective at placing both production and compositional skills in proper context. This is raw, fundamental, wholly convincing black metal whose only 'crutch' might be seen its lack of originality, only not to the majority of those who are likely to invest in this. I thankfully felt my fingers and toes turning blue as I did with Anguished of Finland's debut or Atra's Death Coven, and the record struck me as a solid summer curative to help deal with the disgusting sweat on my forehead and limbs. After all, as Leonard Jeffries Jr. once reminded us, I'm one of those 'ice people', so I've somewhat of a bias for music that makes me feel so good by feeling pale and awful. Neige Éternelle does exactly that, and so I've got no choice but to recommend it to all the craven, despotic and the desperate who might crawl out from their crypts and rocks to acquire it. A great debut!