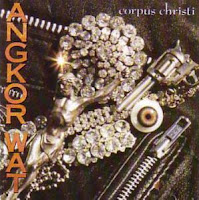 Contrary what you might think upon initial exposure to "Indestructible: Innocence 1990", Angkor Wat had not become a knockoff of Celtic Frost's "One In Their Pride" or Ministry's A Mind is a Terrible Thing to Taste. It's one of those 'hey, look at us we're pretty open minded guys who like to fuck around' situations where the intent was probably a lot more admirable than the result. But, no, Corpus Christi, titled after the band's own home town, is more or less a direct continuation of the sound off the debut When Obscurity Becomes the Norm...Awake!, but the songwriting had been tightened, and the guitars in tunes like "Turn of the Screw" and "Anne Marie" had taken on a more surgical nature with melodic mute pickings that are simply far more pleasing to my ears even if they don't ultimately configure into great songs. In other words, this is partially the more directly 'thrash' of their works, but it arrived a bit too late in the grand scheme of things, dicks around too often, and compared to late-cycle masterworks like Artillery's By Inheritance or Kreator's Coma of Souls, it's a paltry and nearly pathetic example of its form.

But, hey, at least they were on the road to self-betterment, and tunes like "Ordinary Madness" or the bludgeoning "Schizophrenic" with its filtered vocals actually walked the border of being interesting. As with the debut, you do get a fair amount of variety in the construction of the riffs, but that doesn't always lend itself to strong overall song composition. There's a superior flow once you get past the intro, and plenty of meaty and chunky mid-paced rhythm guitars for you to start up a mosh to, but then you get to a piece like "Sinking" which lumbers around like a special needs antelope separated from its herd, and Corpus Christi becomes very quickly derailed. Bass is still a strong component, but a bit muddier here than the debut. Drums are natural and reflexive, especially when hitting grooves or cadences (like in "Golden)". I like the glittering acoustic guitars that inaugurate "Ordinary Madness", especially when joined by the atmospheric electric melodies, but even there they might have worked better if infused through more of its considerable seven and a half minute bulk. However, on the downside, "Sour Born" is almost like they were testing the waters of an entirely different style, a driving and noisy rock piece which I'd place somewhere between Neil Young and Sonic Youth...really fuckin' weird, to be honest, and doesn't work in context with most of the songs leading up to it.

Also...the cover of Heart's "Barracuda" with the higher pitched vocals is entirely out of place, and it ensures that the tail end of the album is impossible to take seriously, even if the trotting of the rhythm guitar is duly chunked up and driving, and the bridge sort of atmospheric...listen to Chastain's version which feels far more natural. Corpus Christi also suffers from a few other quirks like the occasional, terribly lame attempts at cleaner vocals. It sucks, because when the Texans are doing their own thing, and they're 'on', this proves the better of the two full-lengths. Some better riffs, and some lyrics with depth (like on the title cut). If only I could pluck out the five best tunes that sound like Angkor Wat and turn them into an EP, this might top When Obscenity Becomes the Norm...Awake! in quality, but the plurality of strange missteps and failed attempts at self-realization and originality cock everything else up, and this is probably of no interest to any thrasher without a penchant for masochism or a deliberately ironic sense of humor. No wonder they handed their resignation letters in, because this basically amounted to a a career crucifixion. Clearly they wanted to move on to greener pastures...and a few did, to industrial metal acts like Skrew, and ironically Ministry and Nine Inch Nails (so the intro here was a bit of foreshadowing).