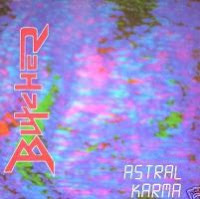 A band so obscure that I'm sure its own members have difficulties trying to recall it, Brazil's Butcher was nonetheless an interesting commodity in that it was performing a far more classically tinted, progressive brand of thrash metal amidst a scene rife with dirtier, black and death-fused acts or others clinging desperately to the coattails of the national heroes and pioneers Sepultura, who were by that time blowing up across the world to the point that labels were interested in headhunting a few other South American acts who might compare. Astral Karma was the quartet's sole full-length effort, released through Cogumelo after years of demos, but my own first encounter with them was the Warfare Noise III split (same label) that featured several other equally-unknown groups who had themselves only ever gotten to the demo level. Props to Butcher for cranking up its career a notch, however futile or fleeting the end result, and also for taking such a unique approach to the medium, which is simply unlike anything else of its time in its geographical region.

The writing here is characterized by a heavy use of technical, often indulgent riffing that walks a fine line between pure neoclassical shred, fusion jazz influences and a surgical depth redolent of the German bands Mekong Delta and especially Deception Ignored-era Deathrow, which is naturally what drew me into Astral Karma, being an incurable whore for that style. In fact I would not be surprised to find that album, The Music of Erich Zahn, Voivod's Dimension Hatross, Watchtower's Control and Resistance, DBC's Universe, or early Coroner and Psychotic Waltz in the guitar player's collection, because he manages to put his own spin on comparable picking techniques that are easily the dominant factor on this album. The bass playing is likewise intelligent, fluid and busy, far more than you'd expect of peers like Sepultura or even The Mist, though it suffers from being a little lower in the mix than the rhythm guitars and vocals, so you can't exactly bask in the man's skill even when you want to (but it's audible enough to brand the guy a South American Ron Royce). Solos are heavily technique driven and not all that compelling on their own merits, but then again, most of the rhythm progressions could be considered 'leads' for other bands, so you're getting plenty of fretboard exploration at any given moment.

There's not a lot of 'boom' to the kick drums, but the snares are dominant and powerful enough to allow the listener's mind to access the contours and momentum of each rhythm guitar sequence, while laying in a number of great fills and grooves to the shifting landscape of technicality. Vocals are a gritty, grainy style that actually reminded me of Snake (Voivod) in the later 80s or when he was punking it up on the reunion discs. Obviously this is a lot more monotonous and exhibits less range than the guitars, but with just the right level of reverb on them I enjoy how they crash against the instruments and 'center' the recording, keeping it firmly rooted into the thrash perspective rather than letting the guitars fly off the hook. Which it could very easily do, because while Butcher was not as manic or dense as Florida's Cynic or Russia's Аспид (Aspid), Astral Karma was clearly focused on an audience of musicians rather than your garden variety hi-top sporting Anthrax and Nuclear Assault 'banger. 'Dressed to impress', despite the budget restrictions on the production, but unfortunately the 90s had become a dead zone for this style...why else would an album like Deception Ignored, arriving later in the previous decade, not continue to make ripples? Fuckin' gangster rap and grunge!

Now, Astral Karma is not without a few flaws. The lyrics read like pseudo-science prose, and contain a lot of cool imagery, but can seem a little hard to follow being that English was likely not the members' primary tongue. The pure prog/fusion rock pieces like "Spiritual Space" or "Analytical Soldier" are hardly mandatory, even if they open up the listener to the band's more eclectic than usual influences. Both are performed smoothly and help to break up the raging neighbors, but they don't serve much other purpose other to confirm the band's jazzier experimentation just shy of Pestilence's Spheres or Cynic's Focus. Inaugurating the song "UFOs" with a morsel of the Close Encounters theme is a little cheesy, but at the very least they compensate with a pretty incredible track that sounds like what might occur if Yngwie Malmsteen had guested on a Voivod record and made Piggy's eyes roll up in consternation. I also had mentioned that the leads are quite formulaic and predictable if you're a heavy fan of the scale based classical style, and this occasionally extends into the rhythm guitars of tunes like "Inside" or "Quest" which feel like pretty familiar patterns even for the 80s/90s. Astral Karma also cycles through so much material in attempts to flood its audience with content that it doesn't dwell on its more memorable riffs quite long enough...

That said, if you can track this down (and let's be honest, that will likely have to be in digital form), it's well worth the time for any fan of this small, limited niche of the thrash or power metal market. I wouldn't go so far to dub it 'brilliant', since it hasn't exactly molded or changed my life like No More Color, Deception Ignored or Control and Resistance, but for an 'out of nowhere' recording, Butcher's talents were substantial, and they packed a lot of effort into this that, in a just world, would have panned out into them securing further releases and building up a following. As it stands, Astral Karma is all we've really got to remember them by, but its well worth listening to, especially in today's environment where Vektor has (deservedly) become such a player in proving that intelligent thrash still has some life to it. You could 100% imagine Butcher as a proto-Vektor, just a bit rougher around the edges, so if that comparison lights up your groin, please check this out and revel in the might-have-been.