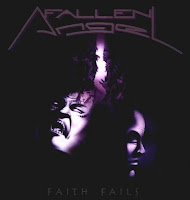 It's difficult to imagine a region of metal music in which the Swedes weren't a dominating force, especially considering the past 20 years, but 80s/first wave thrash metal was clearly one of them, and only a trickle of acts came from that particular scene, several of which were simply too late to the dance to find a partner. A prime example of this was Fallen Angel, who were writing in a decidedly late 80s style with only slight advances in their production values to separate them from a whole host of US acts. Makes sense, as the group was formed in the middle of that decade and even the material on their sole Massacre full-length, Faith Fails was cultivated from earlier, unsigned output like a self-released EP in 1990. Of course, by '92 this style was already on the way out, The Black Album and Seattle music scene had changed just about everything, and even Fallen Angel's chief influence had begun tweaking its style towards something different...

That being Testament, whose guitar composition on albums like The New Order and Practice What You Preach really rubbed off on this band at the end of the 80s, to the extent that there are points on tunes like "Premier Parish" and "Ice" in which I felt like Eric Peterson had hijacked one of the rhythm guitar positions. Precise, thick palm muted picking drives a lot of mid-paced headbangers with splices of surgical melodic fills that wouldn't have been out of place on either of the aforementioned West Coast outings. Hell, they've even got the requisite power ballad (the title track). The only thing really missing is Chuck Billy's vocal presence, because Johan Bülow had a style which was more like a petulant imp in the lower range, but sounded eerily like Nuclear Assault's John Connelly when he's straining to fill the higher octaves. Otherwise, this might have been a natural successor to Souls of Black if Testament had not chosen the moodier heavy metal nostalgia of The Ritual (though I'm glad they did). That said, while the Swedes were not onto anything new, and ultimately a composite of American forebears, they do manage to develop some variation and tight songwriting that actually prove worthwhile.

This is a pretty clean sounding affair with a lot of punch to the rhythm guitar and a somewhat sterile drum mix, but keep in mind that we were still in an era in which many thrash drummers were confused as to whether they needed to become Gene Hoglan thunderstorms or better represent the hard rock and punk influences that initially fueled the subgenre. To be fair, there are some decent, measured double bass patterns strewn throughout, and some powerful snare strikes, but I did get the impression that a lot more power could have been applied to a beneficial effect. The bass is thick and plunky, another parallel to the Testament influence, but I found that the lines often got buried beneath the guitars, especially when the lead harmonies break out in tunes like "Premier Parish" and they totally steal the spotlight from anything else. Speaking of which, the melodies throughout the album are fantastic, mixed to great effect to instantly add more depth and character to the entire experience, elevating even Johan's vocals when they are performed in conjunction (like the chorus of "At Night", which is superb).

Once you get a little deeper into the track list, other influences start to rear their ugly heads, like a bit of later Idolatry-era Devastation or Void Terra Firma/Beyond Recognition Defiance due to that tightness and polish of the rhythm guitars ("Hangover" for example). "Dental Surgery" is clearly an attempt to resurrect Metallica's "Battery" so much that the initial charge rhythm sounds almost exactly like the verse guitars in that song. "Another One" has an interesting, clinical composure reminiscent of Destruction's Cracked Brain album. I think the main thing Fallen Angel really had going for it was the gorgeous, gleaming harmonies that weren't necessarily a factor on any of the influences, but I also won't deny that they were solid songwriters who kept the pacing varied throughout the 49 minutes of material, with very few songs that I couldn't at least enjoy by banging my head to. "Hangover" was rather weak, and I could have lived without the "Faith Fails" ballad, but the latter was well enough conceived with the lush acoustic guitars and ambiance that I don't hold much of a grudge for it...and I like that you can really make out the bass fills there.

I'm pretty sure that this was virtually unheard of outside of Europe, and I for one knew no one here in the States who had ever listened to it, but when playing it for a few Testament fans in junior college it elicited some strong reactions, followed by requests for a dub. Faith Fails is a well written example of a craft that had already more or less breathed its last (for the time being), and honestly this is the sort of thrash metal you really won't hear anymore, since most of the modern revivalists hone in on other West Coast US or German influences and build off of them, while originators like Testament, Heathen and Forbidden have evolved their own styles into a more modern milieu. But, at the same time, that ensures that Fallen Angel, derivative or not, have a rarity and obscurity about them which makes them fun to revisit on occasion, and fans of clean as a whistle, turn of the decade US thrash like Practice What You Preach, Twisted Into Form, Beyond Recognition and When the Storm Comes Down might very well appreciate it.