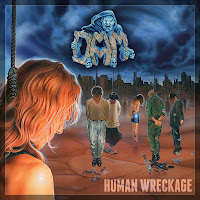 Perhaps one of the least distinctive bands on the entire Noise Records roster (along with Grinder), Morecambe's D.A.M. was snapped up near the tail end of the thrash craze of the 80s. But to be fair to these Englishmen, sticking out amidst a stable that included Coroner, Voivod, Helloween, Celtic Frost, Kreator, Sabbat, Tankard, Destruction, and a dozen other legacy acts of their caliber would be difficult for anyone to accomplish, so one can hardly count this among their faults...but fear not, because they've got plenty of others, beginning and ending with the fact that their songwriting and overall style were so painfully average that their acronym is about the only thing I could remember about them unless you were shoving this record directly into my face. And that's the problem, here, because by the time their debut Human Wreckage arrived, the medium had already been kicked into the stratosphere both commercially ('the Big Four') and artistically (Coroner, Artillery, and others either had released their brilliant showstoppers or were on the verge of doing so).

So...what was left of the pie for D.A.M. ('Destruction and Mayhem') to gnaw upon? Just a few chunks of apple or peach at the bottom, scraped up with a dull and rusted fork and swallowed with a stale pint. Now, I'm not trying to make the case that these gentlemen were incompetent by any means: Human Wreckage is comprised of the standard, serviceable sort of thrash you'd find in many urban/suburban neighborhoods in both the States and Europe throughout the 80s. Most of us had a handful of local bands on this level in either the demo stage or getting their first label break before the wave broke with The Black Album and grunge, but D.A.M.'s own bit opportunity placed them among giants, or rather, giants-in-the-making. So I guess I must state up front that some of my unfavorable reaction to this record was colored by expectations I held for what was easily my favorite label of the time. There was a particular standard of quality I imagined for all efforts under the Noise banner, with the possible exception of some of the borderline hard rock/metal light releases. Yeah, there were disappointments, like Cold Lake, but these were 'after the fact', poor decisions made by the artists and their management that had the misfortune to follow masterpieces.

But with a band like this, it seems like Karl-Ulrich Walterbach and crew might have just randomly chosen a tape out of the slushpile (sheer speculation, for all I know they were the object of a bidding war). Human Wreckage is composed of incredibly bland 'street enforcer' thrash with a distinctly New York feel highly reminiscent of not only Anthrax (Among the Living, State of Euphoria) but occasionally some of the hardcore/thrash crossovers like Cro-Mags or Leeway. The standard practice here is mid-paced, palm muted rhythm guitar progressions configured into 90% completely predictable patterns, with only the rare exception to appreciate. Everyman thrash in redux. Fist pumping, 'plain Jane' riffs that have almost no inspirational qualities which are often accelerated into basic tremolo picked speed/thrash sequences which are just as dry of compelling notation as the mosh parts. No superb melodies inherent within the rhythm guitar riffs, and almost no capacity to incorporate wicked sounding minor riffs to create anything despotic, threatening or evil. So it's 'street thrash' without the meanness. About the best you could say for the writing is that they're pretty good at tacking on a little atmospheric lead here or there to spare the listener from utter boredom...

This was a Harris Johns production, so the guitars are going to rule the roost, but obviously not one of the better records he worked on. Clean, but at the same time, sterile. The drums have dreadfully little power, generally just slim snare-driven beats over the mid-speed stuff and then occasionally a clumsy and ineffective semi-blast when they speed up, the kick having all the character of a plastic bucket. Bass guitars thump along with all the presence of a salaryman passing you on the subway, effortless echoes of the rhythm guitar, almost like a pale shadow of Frank Bello without the muscle and personality. Attempts to 'dress us' Human Wreckage with classical guitar intros ("M.A.D.") and interludes ("Vendetta") fall flat on their faces since the material they setup is just so drastically uninspired, and a whole lot of weight is left on the vocalist's shoulders to entertain us. And the guy tries, using a bitter layman inflection which shifts between a mid and higher range, spinning a bit of acid and vitriol in there that reminds me of a lot of second tier Teutonic thrashers' accents, with a bit of Bobby 'Blitz' Ellsworth influence for good measure, and some gang shouts to back him. Definitely a loose cannon, and a lot of his lines outright suck, but one gets the impression that with better music he would have become much more unhinged and entertaining.

Most of the lyrics are far from terrible (though the chorus of the title track tries hard), but just combing over the song titles seems like they just lifted them from other bands' names or song titles, and it only adds to the generic quality that has plagued Human Wreckage for going on 25 years. A drooling teenage Noise fanboy, I picked this up for the label association alone, and it was one of those tapes I put on my headphones and then quickly shelved, thinking that perhaps I just wasn't 'getting it' and I could go back to it later. Turns out that wasn't the case, this is just really banal thrash that might give Sabbat's Mourning Has Broken a run for its money as a sleeping aid. A few tolerable tunes like "Terror Squad" and "Aliens", but even those lack the big hooks and choruses that I did then and do now continue to demand of this genre. D.A.M. obviously enjoys performing thrash metal (otherwise they would not still be at it), but sadly Human Wreckage was straight-to-the-bargain-bin shovelware. The surplus of a beyond-saturated signing spree.