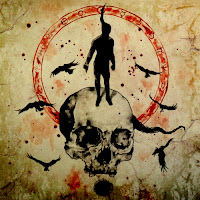 Production was one of the personal selling points of Monarque's sophomore full-length Ad Nauseam (an expanded demo rerecording), and it's also proven a forte for Lys Noir, an effort which streamlines the Quebecois act's sound into a flood of wretched, resonant emotion. I admit to not paying much attention to the intermittent series of EPs and splits that vocalist and multi-instrumentalist Monarque has released since that 2009 offering, but upon receipt of this new album, I instantly recounted the cover artwork for that last record, and was excited to hear the developments in his compositional skills and atmospheric flourishes he might have brought over from some of his other projects (like Déliquescence). Admittedly, my expectations were met, if not entirely exceeded. Lys Noir lacks the benefit of that initial impression that so engrossed me those several years back, but it's a textured, competent, consistent rush of agony and ecstasy nonetheless.

Though it's artistic lineage hearkens back to 2nd wave Norwegian classics like De Mysteriis dom Sathanas, In the Nightside Eclipse and Transilvanian Hunger, Monarque actually conjures up comparisons to recent fare from Finland's Sargeist or Sweden's Arckanum in that it implements deceptively simple tremolo picking progressions that cultivate a breadth of depth, sorrow and glory, like a last, desperate, suicidal charge into the afterlife. But the differences here are in the atmospheric dressings like the organs that roil across the landscape of the rhythm guitars to create a more fulfilling, 'classy' sense of aggression, a cultured and musical wall of force. If I were to break down a lot of the specific riffing patterns, they'd not be too impressive on their own merits, but if placed into the context of Bardunor's rapturous blasting patterns, simmering melodies of both the guitar and the organs, and Monarque's substantial, resonant rasping, it's difficult not to be overrun by the sheer weight, syncopation and momentum of the thing. Granted, the blasting does become a trifle monotonous, as it will in most records that rely too heavily upon pure speed over tempo variation, but at the same time, Lys Noir might not be so effective without such a sense of unfiltered, tempestuous exposition.

It's not all rampant force, of course, and there are segues in which clean guitars and chill ambiance take over, deep in "L'Appel de La Nuit" or dominant through the beautiful interlude dubbed "Solitude", which was one of the most inspiring points of the entire album. The closer, "Comme Les Vers; Sous la bannière du Lys noir" also takes a mildly different approach with flowing, slower chords reminiscent of late 80s Bathory that shift into some beautiful, mesmeric and simple tremolo picked patterns. Lys Noir also serves as a tasteful pseudo celebration of Quebec black metal, not only by featuring Sébastien Robitaille of the esteemed Sorcier des Glaces on "Comme Les Vers", but also a cover of Frozen Shadows' "Au Seuil des Ténèbres" from their 1999 debut Dans les Bras des Immortels, a bit of a cult classic for this scene, and flush with the originals if a fraction more savage in disposition. Once again we experience this sense of unity, self-idenity and defiance  among the musicians that is also reflected in the Quebec culture as a whole, which is one of the reasons I admire the place and its people.

Tonally, Lys Noir was precisely what I was hoping for, with the abrasive, sustained rasping of Monarque taking command of the album's vaulted, starry ceiling, and an unapologetic, violent fluidity to the rhythm section. Bass and drums are still relegated to 'support staff' for the riffing, organ and vocal arrangements, which does inhibit the potential rhythmic variety of the album to an extent. Personally, I'd like to hear some more interesting fills or change-ups to round out the excellent accelerated segments of the songs, but I do realize that a lot of proponents for this style would beg to differ. However, when Monarque does slow down to breathe, it's quite transcendental, so you can understand why I'd like a stronger balance between the two dynamic poles. Ultimately, while it is hardly a novel or masterful exercise in its medium, Lys Noir is damned solid, a bullrush of stamping feet in the bleachers of a cosmic arena, while a thousand chalices of blood are toasted to the sky until they become crimson-stained stars. Wish fulfillment with a razor.