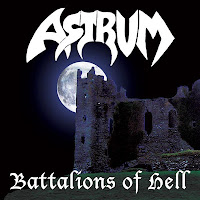 Prior to Battalions of Hell, Astrum was a band I enjoyed more in spirit than in actual music content, essentially a primal and punked out alternate history imagining of the old Hellhammer/Celtic Frost aesthetics which suffered from a little too much sloppiness and also blandness in the riffing selections. That has changed with the third full-length, because the pieces have really fit together into something better-paced and better-rounded, not to mention superior in terms of production and writing. Granted, it's still exactly the same set of sounds you'd have expected if you actually heard the older works, but the riffs, even if not original by any means, still hang with you, and Tim's vocal delivery here is really on point, with the familiar, beloved raving and haughty barks of Tom G. Warrior...I mean, really, if you've run out of Warhammer records, and you want more in this very particular niche, then I'd urge you to track this down.

Basically, envision if somewhere between Apocalyptic Raids and Morbid Tales, Celtic Frost had decided to cultivate a union of occultist lyrics and old school hardcore punk with a few spurts of morbid thrash, and ignore the Oriental mystique and experimentation that flowered throughout To Mega Therion and Into the Pandemonium. Maintain the horror and ritualistic lyrical bent, but revoke all pretentiousness, and you arrive at Battalions of Hell. The riffs, while more or less based on variations of the familiar motifs these early 'first wave' black metal masters conceived, feel feisty and fresh thanks to the raw buzz of the distortion; not so grimy and gutter-spawned as the classic material of the hardcore band Sheer Terror (who also had a massive Hellhammer influence in their riffing), but quite straightforward and translatable into a live setting, which I'm sure will make an evening with Astrum hella entertaining. Not all of the riffs are facsimiles of this one influence, mind you; they'll often cruise more directly into a crusty oi punk terrain, some drawn out traditional Sabbath-ian doom licks, or a bit harder of a thrash/black bit with some muted sequence, even a blast beat, but they all revolve around this consistent core which honors the Swiss butchers wonderfully.

Production is still pretty threadbare, but the instruments are well mixed to give a clean, live impression in which you can make out all the rich, ripping fill work and the booming thud of the bass lines. Which, granted are not all that interesting, since Tim's focus is more on the vocals and guitar, but the volume and enthusiasm are both very steady, and I'm not sure the style of writing really lends itself to using the bass for harmonies or individual grooves set apart from the rhythm guitar structure. Just enough echo and pitch on the vocals so that they really sound like a younger, more energetic Warrior (nothing like the Triptykon stuff), when he used to belch forth a mid-paced whine in the 80s. The lead guitars are completely atonal, frivolous and sporadic in the tradition of old thrash or speed metal when tapping and scale techniques weren't priorities, but they also help to saturate the writing with an extra dimension of immediacy and busyness that keeps its intense. I'll also add that the lyrics are quite solid. Not a lot to them, maybe, but each gets its imagery across concisely and effectively without any need for eloquent verse.

The best, though, is how Astrum doesn't bore you here with the same shit over and over again in a direct sequence. Sure, some tempos and riff patterns are only mildly reconfigured across separate songs, but they open with a blasted title track, then cruise into a groovy number, then fast again, slow again, and so on. It's simply a well structured album, and its hellish defiance is very much viral. Tunes like "Moonscapes of Infinity" and "Under the Pentagram" are among the best he's ever written. Not all the songs are amazing, and a few inhabit a redundant sonic space, but overall, this is tight. Obviously, if you're hunting for technical instrumentation, progressive qualities or unique songwriting, Battalions of Hell is probably not some Holy Grail from which you should drink. Tim leaves no room for second guessing his influence, and he bears it proudly on his sleeves...but that makes this record no less fun, trust me, and he seems to finally have mastered what he set out to do with Apocalyptic Dawn and Tales of Witchlore. It will be interesting where he goes from here, whether he'll mete out more of the same or perhaps drag in some other cult sounds for an added level of dynamic potential. But I doubt we'll be hearing Cold Lake II anytime soon.