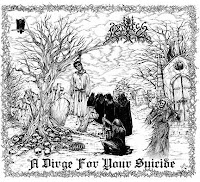 While I'm sure I've seen Peru's Mirthless described as a 'funeral doom' band in the past, this full-length debut album is actually quite flexible in terms of how it balances the standard slog of the form with more up-tempo sequences that help to break up the longer cuts (of which there are only two on the recording). You'll hear a lot of 80s or 90s trad doom, straight rock 'n' roll or even punk influence in some of the chord selections, which are unfortunately rather standard in execution; but where the rhythm guitars might severely lack in the novelty department, the rugged analog mix and raw presentation of the vocals and instruments definitely gives it some character that it might otherwise have lacked if it were your straight up, garden of gravestones polished tribute to old Anathema, Paradise Lost or My Dying Bride.

In fact, A Dirge for Your Suicide feels so raucous and live that you could be sitting in the same garage or basement where the trio were performing. Meaty, driving chords cover up the bass a little, but you can totally feel the chugs in your gut as they creep along, morphing into and out of chord progressions that are surprisingly not as despairing and dreary as you might expect from the cover artwork alone. Which once again brings up the trad doom comparisons, for there's quite a lot of Sabbath, Pentagram and Vitus in the way the note patterns play out. That said, there's a slightly more sorrowful side to the band when they fuse in some ringing, Candlemass-like melodies during the slowly paced majority of the fix tunes, like the titular "Dirge" which also incorporates some cleaner, mournful vocal melodies reminiscent of My Dying Bride. Otherwise you're getting sustained guttural grunts interspersed with slightly higher pitched snarls, which are effective but occasionally a little contrasted to some of the more rocking chords that pop up in places like "Pantheon of Disgraces" amidst the depressing strains of harmony.

Wasn't totally impressed by the drum levels, since the kicks, toms and tinier hissing cymbals all seem to occupy separate planes, but they certainly contribute to this no bullshit, live vibe that Mirthless are giving off here, even when they toss in something like a blast beat out of left field. A Dirge for Your Suicide is almost entirely unprocessed, stripped down so that it wouldn't sound a lot different if delivered on the stage than the studio. Other gripes were that I felt myself wishing for more interesting bass guitar lines to help deviate from the pretty predictable rhythm guitars, and the melodies aren't exactly the sort to haunt you long after the fact. Sometimes transitions just seem haphazardly tossed into the songs so they don't achieve a high emotional impact, but then this is not constantly a soundtrack for suckling your regrets, since the Peruvians don't seem to share an interesting in boring the listener like many others clogging the medium. This is just unapologetic, rough, sincere death/doom more in sync with decades of olde than the heavily produced, over-tracked Gothic whining with female ethereal vocals that you'll hear in a lot of European bands of the 21st century.

I can't exactly say that I enjoyed the album, since I wish the rhythm guitars would attempt some more unusual and memorable riffs regardless of the pacing, but at the same time, it never once put me to sleep. Varied tempos and song lengths ensure that it remains marginally fresh on the ears, but both the chord progressions and melodies could use some work to become more melancholic, jarring or soul scarring.