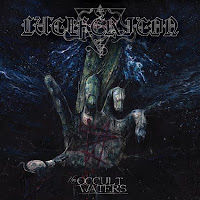 Originally self-released in late summer 2012, with decidedly cheesier cover art which has been dressed up here, The Occult Waters is a burst of old school purity from the Netherlands of all places. Granted, the country produced some of the most important death metal acts of history in the genre's prime (Pestilence, Asphyx, Sinister, etc), but of late I haven't recognized it as a prolific harbor for 80s/90s nostalgia. That said, Blood Harvest records has a real nose for sniffing out primitively brutal and purist sounds as you'll rarely find elsewhere, so if you've lately appreciated the works of Burialkult, Cerekloth, Necroccultus and the many others they've released, then this 12" MLP reissue should be placed immediately on your radar...at least to check out once.

This is your genre-standard, viscera gargling dawn of the 90s sound drawing heavily on ancient US influences like Morbid Angel, Deicide, Incantation, and Death, with a lot of busy tremolo picked guitar lines and resonant, echoed, utterly nihilistic guttural vocals that unfortunately become pretty monotonous over the intonation of both the verses and choruses. They cultivate a very underground, DIY aesthetics with clear but slightly raw guitars and tinny, understated drumming, but I give them points for simply sounding ancient as they intended. That doesn't necessarily translate into great music, though, since painfully few of these rhythm guitar progressions stand out for anything more than their adherence to tradition, but I felt a fluctuation of both cosmic and cavernous aesthetics when the band were all out riffing along to one of the faster sequences, and they incorporate a lot of wild leads and rhythms that occasionally hinge on a black/death hybrid style ("Moon Over Fading Statues" or the closer "Deathtongue").

Though a lot of their impulse is to play fast, Lucifericon also throw in some slower to mid-paced breakdowns that definitely chop up and better balance the songs to a more fulfilling degree. They also delve into atmospherics; the dark, monotonous, brooding ambient intro "Infinituum" leaves a lot to be desired, a pretty bland setup for "The Temple of Lucifericon", but I dug the acoustic guitars inaugurating "Moon Over Fading Statues". Overall, though, the riffs are just pretty basic and uninspired by themselves, and I felt like the tone was pretty dry and incapable of standing on its own legs without the barking madness of the front man. There is texture and effort in the composition, but the end result just wasn't memorable in such a wide sea of similar acts. That said, there is a sub-set of nostalgic death metal fanatics who go absolutely apeshit over these sorts of authentic, raw and straightforward recordings that recall the old 90s production levels, and The Occult Waters falls somewhere between a demo and album mix. I doubt that audience would be too turned off by what they heard here, but personally I found the atmospheric qualities trumped the actual music.