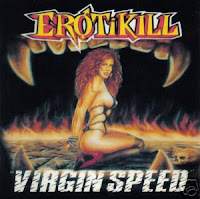 Alright, let's all stop laughing so I can write this review. Yes, the cover image to the sole full-length of California's uber-obscure Erotikill is the very definition of 80s cheese, but I've got to give the lass some credit. If some toothy beast was about to clamp its jaws down on my voluptuous body, I'd probably look a little more terrified. But look at her arms! I'm willing to bet she's luring the creature closer, to then break her bonds and strangle it with them, using the fiery ring surrounding her to cook it up for dinner. A total Red Sonja moment, mother fuckers! At any rate, Virgin Speed is a little more difficult to write-off musically than it is visually, being that it is comprised of some low-down, mean, dirty speed/thrash metal which is perhaps not so riff-tastic as other acts in the whole Venom, Bulldozer, Piledriver and Destructor mold, but fits the bill for those among you who might be seeking out such uncompromising, low brow aggression for cracking beer cans over your skull or ogling issues of Hustler from 1986.

The mean vocals and meaner licks here remind me of some union of earlier Whiplash, Juggernaut, Anvil Bitch and Hallows Eve, a poor man's Power and Pain with a Baptism Under Fire finish; though I'd not be surprised to find copies of Kill 'Em All, Show No Mercy, Welcome to Hell and Metal Inquisition in the members' collections, because many of the basic riff progressions seem to hail from that train of thought. However, what is probably most surprising about Virgin Speed is that the Californians actually pace out their debut album with a number of slower or mid-paced riffing sequences that really round it out as a package deal...the measured, melodic intro to "Slay Ground" or pure power/speed riffage that sets up "Enemy in Our Midst" are just a handful of examples of how they weren't simply trying to be the straightest, most repetitive of thrash outfits. Leads and harmonies are wild and frivolous and frankly the most exciting component of the band's songs, like the beginning of "Betrayer", but when it comes to pure riff architecture they're definitely in the familiar mindset of the mid to late 80s, which is probably why Virgin Speed seems as if it were born too late to the world.

Of course, that was 'then', and in the 'now', nostalgia has totally taken over the metal scene, and a record like this would surely be a sought after sound for those who pine for that era of big hair and bigger...yeah. But some might have reservations as to the production here. Personally, I didn't mind the brash and raw guitar tones (think Sentence of Death but a bit less tinny), though they often seem to get smothered by or smother the trash-can drums, and I like how they are combined with a pretty substantial picking arsenal that, while never technical or innovative, is at least keeping busy without endless repetition cycles. However, I think a lot of folks would single out vocalist 'Vic Van Wie' as the most charismatic component of this album...he's got a raucous bark not unlike a Harlan Glenn (ex Juggernaut) or Nasty Ronnie (Nasty Savage) but not above some comical dude-whining inflections (in "Betrayer", for example). Granted, the guy's a bit loose in delivery and some of the whinier lines are like annoying pimples against the more aggressive, carnivorous voice he generally favors, but at least he's never boring...

As for song quality, the album is pretty shaky. Most of these tracks have a decent flow with solid if not ultimately memorable riffing configurations, gang shouts, and clear choruses that are somewhat less of a payoff than you'd want from your average Megadeth or Metallica tune of the 80s. Cuts like "Enemy in Our Midst" and "Patriot" are appreciably pissed off and you could probably toss half the album into your favorite dirty speed/thrash playlist and it wouldn't manage to stink up the experience, though there would not be hooks that sink into you like "Black Metal", "Die by the Sword", "Jump in the Fire", etc. I would say that Erotikill deserved a little more lip service than they've gotten, so in this day and age they might prove an entertaining haven for those hunting down spikes, skulls, leather and aerosol babes and just a raw, rowdy record which doesn't take itself (or anyone else) too seriously. I guess I'd describe this as 'okay', but an amusing 'okay' that somehow simultaneously recalls puberty, bad 80s horror flicks, and bad pulp sword & sorcery fiction (though the last two are merely due to the artwork).