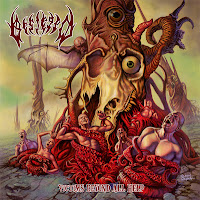 Victims Beyond All Help was originally self-released and passed around the underground a few years back, but is seeing an official CD issue through Unspeakable Axe, a new sub label of Dark Descent that focuses on thrash, crossover and other niches the parent imprint doesn't generally deal in. Canadians Besieged are naturally a good fit for the family, since they mete out a hybrid of traditional 80s extreme thrash and proto-death metal we have only rarely heard outside its initial surge, and is likely to appeal to purists seeking something more vicious than your standard crop of  West/Coast Bay Area worshipers or pizza thrash dorks. Not that the former doesn't play into Besieged's sound in a big way, but they push the parameters a bit more than, say, Warbringer.

This is short, fast as fuck, and completely to the point, musically and vocally reminded me of Dark Angel's Darkness Descends if it were ramped up into a current studio production scheme and peppered with some death metal influence circa Morbid Angel (Altars of Madness) and Ripping Corpse (Dreaming of the Dead), or perhaps even more accurately, Morbid Saint's Spectrum of Death. Riffing progressions are often reminiscent of records like Slayer's Reign in Blood, Sepultura's Schizophrenia and Beneath the Remains, Razor's Violent Restitution and Kreator's Extreme Aggression, yet explosive enough to scratch that 'hyper-thrash' itch one might feel for a band like Japan's Fastkill. To be honest, when broken down into individual patterns, the rhythm guitars aren't particularly interesting or catchy, largely comprised of chords or mutes in sequences you've likely experienced before, but they'll add just enough of a melodic texture in there to keep the fists flying and the punches effective and balanced (as in "Buried Alive").

The writing is in general frenetic and more concerned with reaching and exceeding the speed limit more so than sticking on the brain, and thus the compositions are rarely as evil sounding as their influences, but I think there's certainly room for this sort of sheer abuse, and enough variety with some mid-paced breakdown neck wrenching rhythms that it doesn't grow too stale or monotonous. Vocals are barked roughly in the vein of Don Doty or an earlier Max Cavalera, occasionally with a sustained, faintly guttural growl. Drums have a pretty natural mix with the snares at the forefront, typical for this sort of thrash. Leads are rampant and efficient but not dowsed in excess effects, so they can seem a bit arbitrary and dry as opposed to giving the tunes an extra boost in atmosphere, but then again I could not imagine this style without them, and there is clearly enough technique being applied. Probably my only gripe with the production was the lack of really notable bass, it's just sort of weaving and hurtling along with the rhythm guitar and doesn't stand out.

Did I enjoy Victims Beyond All Help? As a sort of high intensity therapy, or a brain-flossing of frustrations in my daily grind, I'd say it was fun in small spurts, but didn't leave a huge impression on me in terms of the mix, the songwriting or the vocals. The playing is tight, the aggression is there in spades, but thrash for me has always been about writing those massive hooks that carry the day, and Besieged does not have many such instances through this exhibition of ferocity, and part of that is just because I've heard a thousand similar riffs over the decades. I did find myself temporarily raging along to a few of the tunes like "Internal Suffering" and "Trapped Inside", the latter of which is like a fusion between Vio-lence and Dark Angel, but even these started to run off of exhaust after a few cycles of repetition. But, as I hinted at above, there are not a lot of bands occupying this specific niche, so if a composite of the influences I listed earlier sounds appealing to you, then this is a no-bullshit, no-gimmick emission of pavement-tearing testosterone.