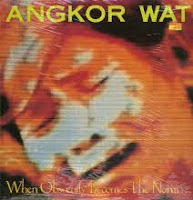 Poster-children for the 'surplus' of the 80s thrash underground here in the USA, Texans Angkor Wat seemed forever consigned to the Death sub label of Metal Blade Records until that folded, and remain pretty much unknown today to just about everyone...including a lot of deep thrashers I've met who seem intent on mining the shit out of every crevice and under every overturned rock of the last 30 years. Superficially I can sort of grok to why they were passed on by many: they had no real logo to speak of, they were only marginally promoted, and had a strange choice of band name based on an esteemed temple/landmark in Cambodia which has been in the hands of at least two major religions. The Asian influenced moniker thing worked out slightly better for Germany's Mekong Delta, I suppose, but I can't imagine it was a boon for either this band or Minnesota's Kublai Khan. But really, I heard next to no chatter through my high school years about either of this group's full-length outings, and though I had experienced a few samplings of their material on college radio, I wasn't able to physically track down the releases until I was bargain bin shopping in Boston several years later.

Which, as it turns out, is no great loss, because Angkor Wat was hardly the best band of songwriters in their field, and neither of the albums was particularly impressive then, nor have they aged well now. When Obscenity Becomes the Norm... Awake! is a clear example of the tepid third rate thrash metal which was clotting up the genre in the later 80s. Flirting with a hint of hardcore punk, nurturing a few fits of technical thrash prowess, but never committing to extremes of any one direction, it's just decently executed and performed material which was like to send a few local necks into their braces. When Obscenity Becomes the Norm...Awake! was a functional and very occasionally fun debut with some clear parallels to both the West Coast and Arizona scenes, almost like an evolutionary link between Excel and Atrophy, and more likely to appeal to fans of similar outfits than, say, the more vicious Germanic thrash and speed metal, or Dark Angel and Slayer. Come to think of it, there weren't a lot of huge bands in this style out of Texas with the obvious exception of Pantera (Cowboys from Hell era) that struck much of a chord beyond the Lone Star state line...Rigor Mortis, maybe, but Angkor Wat were only slightly better known than Gammacide, who were frankly better.

At any rate, this album is characterized by its punchy, clear rhythm guitars and for a louder and fatter bass tone than I'd generally have equated with the genre. Riffing is hardly creative, centered in on a lot of mid paced muted sequences that twist into open chord, hardcore flavored patterns, with some touches of more traditional heavy metal. The actual texture and note selection in the rhythm guitar reminds me a lot of Excel or D.R.I. ("Emotional Blackmail", "Died Young", etc.) but the songs don't entirely flow as well as Thrash Zone or The Joke's On You, instead interspersing very average headbanging passages with clunky rhythm changes or dainty but useless little leads that have a heavy blues/rock & roll flare. There are moments here where I felt like I was listening to a poorly conceived sibling to the Crumbsuckers' Beast on My Back, like if the New Yorkers were moonlighting as this other band and writing music far below their station, but every so often a rhythmic passage with burst out here that shows they weren't completely slacking. Part of that comparison comes from the gravelly splatter of the vocals, pinched and constipated but quite angry, a dead ringer for guys like Chris Notaro ('suckers) or Brian Zimmerman (Atrophy) but lacking the support of great songs.

I felt like the album might have benefited from a killer lead-in track, but "Something to Cry About" is not something to write home about, a concoction of mediocre, bouncing guitar progressions and predictable bass-fills which don't really add another necessary dimension. Unfortunately, even when the band is experimenting with a variety of riff styles, like in the closer "Circus of Horrors" with its clinical barrage of guitars, there is just nothing catchy to come away with. Angkor Wat was far from the most monotonous of its genre, but the dynamics never setup or capitalize any memorable ideas. I'll hear a half-interesting pattern of notes succeeded by several dull guitars, and most of the songs don't feel fully gestated. The production is admittedly good enough, at least on par with anything by Cryptic Slaughter or The Accüsed (who also played with a similar sound) but both of those bands were filthier and more exciting. Lyrics here are pretty relevant for thrash or crossover, covering typical subjects like televangelists ("Emotional Blackmail")  and social apathy/ignorance ("Under Lock and Key"), but not exactly through masterful prose. When Obscenity Becomes the Norm...Awake! was bound for obscurity because it simply had nothing to offer that couldn't have been found elsewhere in more kinetic and compelling quantities, and thus even the exposure of being part of the extended Metal Blade family wasn't going to plead its case.