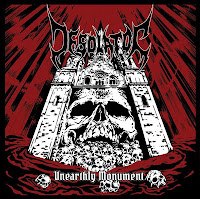 Desolator is perhaps the most unabashedly old school death metal act in a family of underground Swedish projects that includes Ending Quest, Soliliquium and Within the Fall, but beyond getting the fundamental aesthetics right, I wasn't terribly impressed with the Gravefeast demo in 2010. Though a number of those early tracks have made the transition onto their debut full-length Unearthly Monument, releasing through Polish Hellthrasher Productions, the larger selection of material here definitely gives us a better insight and a stronger songwriting showcase of their capabilities. Add to that a straight to the face, down to earth production job and some clear thrash-to-death conversion compositions circa the early 90s, and you've got yourself a decidedly archaic sound arriving at a time when the irons are hot for such flashbacks, and the Swedes have taken a step forward in quality, though not yet an elephantine stride.

I'll give Desolator some credit: they absolutely do not sound like your run of the mill, Left Hand Path worshipers but instead go out for a less abrasive, honest guitar tone which immediately displaces them from the plethora of Entombed/Dismember doppelgangers that have been wearing out their welcome for some time now (with exceptions, of course). Here I was more reminded of those 'other' Swedish cult classics like Into the Grave, Fornever Laid to Rest, or An Evil Shade of Grey, but with a liberal helping of Cianide, Cancer, Autopsy and Bolt Thrower. Granted, the chords seem a little too dry and bare, but meaty and oppressive enough to carry the weight of the quartet's aggressive. A few of the riffing progressions could be linked back to a d-beat or predictable, bouncing breakdown influence you find so readily in this niche of death metal, but for the most part they really drag the imagination back towards the thrash-inspired riffing from which death metal emerged in its infancy. Desolator are also no strangers to evil melodies, like those that open "Feeding Frenzy", and they do a lot to help round out the less interesting chord patterns, though not to the extent that they're like to haunt your dreams for a substantial amount of time.

Unearthly Monument's honest, earthen visage extends to the drumming, which has a nice, hovering live presence felt through the snares, fills and general pacing. Bass lines are thickly pumped along with the rhythm guitars through I'd prefer they were more distinct and independently musical, and the vocals have a dense and guttural inflection which is often drawn out with a bit of Floridian snarling influence. Speaking of Florida, they pull off some respectable, morbid tremolo-picked riffing progressions that hearken back to records like Scream Bloody Gore or Leprosy, only not quite so memorable; but there are also some intense blasted sequences (like in "Impaled") that usher in some of the brutality of the mid 90s. In other words, even if Desolator isn't the most atmospheric or sinister sounding band in this particular scene, there is no denying that they're well-rounded, and unafraid to change gears or tempos to avoid stagnant repetition of ideas. They get their elbows hands dirty shoveling death. It's not an amazing album, but it's a fleshy, humble, and antiquated means for old school purists to kill the better part of an hour (48 minutes), fully aware of its limitations and identity.