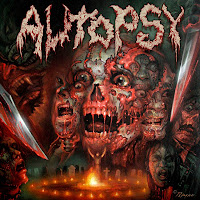 Whereas its predecessor, Macabre Eternal, was a comeback album wrought with a few new ideas and 'progression' for the Californian cult Autopsy, The Headless Ritual is more of a direct return to the style of Severed Survival and Mental Funeral. Can't say I'm complaining, as those have already remained my favorite in their canon of carnage, but at the same time, though if I was only slightly warm on Macabre Eternal or The Tomb Within EP, I admired that, even after 15 years of studio absence, speculation and the on- and offline accrual of a wider fan base than they ever originally had, this was a band still willing to expand itself and take a few chances, which in conjunction with the rise in popularity of nostalgic death metal aesthetics, really paid off with one of the most buzzed-about revival records in the genre. The Headless Ritual certainly doesn't take as many chances, and thus it's by nature a little 'safer' than its older sibling. Yet, curiously enough, I found myself enjoying this a bit more...

Probably due directly to the fact that my only substantial connection to their music had come and gone by about 1991. Gruesome and timeless, indeed, but Autopsy were just never one of my top tier death metal acts, simply due to the fact that a lot of their doom-dowsed riffs (of which there were plenty) bore the brunt of familiarity with a lot of other Sabbath inspired music, and the faster riffing sequences, while filthy and effective thanks to their production, were just not as impressive and mind blowing for me as Autopsy's more surgical and/or evil sounding contemporaries on albums like Consuming Impulse, Leprosy, Scream Bloody Gore, Symphonies of Sickness, Left Hand Path and Altars of Madness. Personal preferences aside, though, Severed Survival and Mental Funeral have never lost their charnel lustre, and they absolutely deserve their pedestals in the pantheon of festering flesh where they remain. The Headless Ritual pays tribute, and often rises to a similar level of quality, thanks to a superb balance of death and doom riffing progressions, but as loud and capable as its production allots, I can't say that I come away from it feeling as viscera-soaked as I might have when younger.

It's a cleaner record, but that doesn't exempt it from sounding heavy as fuck, especially when they lurch into a morbid groove like "Mangled Far Below", an excellent if mildly predictable fusion of death and doom in which the vile harmonies and writhing, serpentine lead-work really help to balance off Reifert's raving and growling, which frankly sound no less over the top than any of the past album, especially when he angles his inflection upward into a more snarling delivery. A number of the tunes like "Coffin Crawlers" and "When Hammer Meets Bone" are fueled by that same hellish punk foundation one can recall from several of the older albums, but at the same time they don't enjoy the most memorable of chord progressions, simply barreling over the listener like a trolley car full of flailing zombies, while Reifert's grotesque and charismatic microphone spasms steer them up and down the San Fransiscan landscape. There are a handful of surprises here, like the melodic death metal interlude "Thorns and Ashes", which is almost entirely built of Maiden-like guitar harmonies and barked out lyrics, or the closer, "Headless Ritual" itself, which is similar but with more layers of rhythm, but neither is necessarily all that exciting. Interestingly, where The Headless Ritual branches off  towards its most melodic material, I am heavily reminded of Arlington's Deceased. Not a bad thing!

Pacing is meticulous, or I might even say masterful. No two songs in direct succession sound repetitive or redundant, and most are kept concise and centered around only a handful of riffing ideas, with the exception of "Slaughter at Beast House" and "She is a Funeral" which are drawn out largely because they are among the slower, death/doom pieces. There are definitely some bum riffs in there, especially the first few minutes of the latter, but eventually you get some payoff in the bridge. Bass playing is thick but very often follows the rhythm guitars, which are themselves only inspirational about half the time, despite the broad, effective tone. Reifert has no choice but to occasionally feel hokey, since he places so much emphasis on grimy syllables that they tend to fall overboard (nothing new, really). However, the guy's drumming is still among the most organic and natural feeling in the genre, tinny or raw where it needs to be, but feisty as fuck during the more charged segments like the storming early riffs in "Slaughter At Beast House". Lead guitars are probably the most central and adept they've been yet in Autopsy's career, but I will admit that many of the rhythm riffs are sorely lacking in creativity or compelling chord progressions, and they don't often stand out.

I've seen a few individuals butt hurt over the cover artwork, probably because Macabre Eternal had a great color scheme and looked fantastic; but hey, it's better than earlier Autopsy like Acts of the Unspeakable or Shitfun, right? Still, veteran Joe Petagno has had better showings (Angelcorpse's Exterminate, Mammoth Grinder's Extinction of Humanity, and many of his Motörhead covers, for example). I think this one still gets the point across of the ritualistic, occult horror that informs a lot of the lyrics, but some folks probably won't be satisfied until they get another Severed Survival. Ultimately, some people just aren't going to dig on The Headless Ritual much at all, since it doesn't necessarily capitalize on Macabre Eternal so much as it's a regression towards their older works spiced up with a cleaner production and a lot of melody. But for what it's worth, I've had a pretty good time listening through it. Didn't impress me nearly as much as, say, the latest Incantation, or what newer 'old school' bands like Tribulation, Horrendous and Necrovation have been churning out in the past couple years, but I felt satisfied that I paid for an Autopsy record, it sounded much like what I expected off the samples I had heard, and I got some giggles and headbanging out of it. Sometimes that is enough.