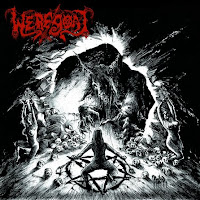 Weregoat is a band bred for a particular atmosphere of grave soil churning primacy and hideous ritual evil. A trio that, while offering almost nothing original whatsoever, manages to even trump its own influences with such a flawless execution of focused filth. Simple and ridiculous lyrics that might read like the menu if Hells Headbanger Records were a cafe and not a music label. Repulsive guitar tone that plays like a mix of Autopsy and early Swedish bands like Carnage or Nihilist from their earlier inceptions. Ominous gutturals that are near indecipherable and sound like they are being howled at you from the confines of a forsaken sepulcher. Spikes, leather and absurd stage names 'Sadoseducer', 'Nocturnal Hellfuker' and 'Indiscriminate Impregnator' (I'm still laughing from that last one) which reek of Hellhammer and Blasphemy.

All of this seems like it could be the perfect recipe for some typical, disaffected throwback to the popular surge of early 90s extreme metal worship that I'm constantly hearing and growing tired of; yet Weregoat are so strong in this medium that they almost instantaneously refresh it. Like the first time you turned 17 and went to a frightening horror movie, or put on a death metal disc back in the late 80s and were astonished at just how disgusting it was. Yeah, Unholy Exaltation of Fullmoon Perversity is 'retro', and nostalgic, but it's such a well executed EP that it easily belongs in the collection of any connoisseur of ghastly, morbid proto-death/black metal. The guitar tone is a beautiful thing, as if they made concrete from a mix of sewer slime and cemetery soil and laid it out as the foundation for their terrors.

I love the grisly feedback and yawning ambiance they use sparsely throughout the record, or the wild and airy, urgent leads they spit into the vaunted ceiling of "Nuclear Cunt". The solemn and distant melodies used to accent the rhythm-sludge in the bridge of "Invoke the Black Oblivion". The dense grooves bisecting "The Hideous Stench of Occult Slaughter" which play out like a mix of Realm of Chaos-era Bolt Thrower and Symphonies of Sickness Carcass. The laid back tinniness of the drumming, which despite hovering at the edge of the perception behind the huge resonance of the vocals or the churning guitar tone, seems as if it was cast at the perfect volume. The balance of shorter undead bursts like "By the Light of the Moon" and "Antichrist Kommand" with more swollen, structured miasmas like "Invoke the Black Oblivion" and "Nocturnal Hunt". The fact that at 8 tracks and 25 minutes, it never comes close to wearing out its welcome.

Sure, Weregoat is a derivative band, and they don't hide it. The riffs, while all quite catchy in the context of the atmosphere, are not complex or individually memorable when taken away from the whole. The composition is about as subtle as molestation circa rabid gorillas. The lyrics as misogynistic and disturbing as possible. Some of the members hail from acts like Engorged, Ritual Necromancy, Splatterhouse, Lord Gore, and Frightmare, so primitive death and black metal is old hat. But for whatever reason, I have not been able to stop spinning this fucking music. They've dialed my erogenous gore-spot and continue to apply pressure as they bleat and baaaa off into the sickening lunar night.