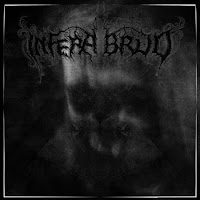 I've been completely out of the loop lately with local New England acts in the extreme metal fields, and it's safe to say that the loss has been mine and mine alone. Recently becoming acquainted with such talented Connecticut bands as Autolatry and Morgirion, I've now encountered an outfit from a little closer to home, Infera Bruo (aka 'Hellish Noise' in English) out of Boston, who simply have one of the coolest sounds I've heard from this region in years, especially for an unsigned artist. In all honesty, I receive hundreds of promos each year from the underground that have nowhere near the level of songwriting ability and proof of concept that this trio (now a quartet) exudes, nor the production capabilities...

Granted, I might have a fraction of bias due to the heavy influence they've culled from some of my favorites in the genre. The cleaner vocals certainly remind me of those used by the great Grutle Kjellson, perhaps fuller bodied and more romanticized; and the fluid, progressive nature of the compositions is reminiscent of Enslaved circa Below the Lights. However, there are also some harsher, choppier sequences of dissonant black/thrash riffing not unlike those used by Immortal on their later 90s works. A few streaks of experimentation course through the album, like the warped intro to "The Devil's Eyes", the spacey pseudo-thrash of "Upon Stone" or the drudging, almost post-hardcore influence blended with the scintillating background noise that opens "A Path Unwritten". But the most remarkable elements at play here are the corpulent, warm guitar tone that floods through the strong blasting and ample bass, and the near complete lack of numbing repetition that you'd expect on a recording where three of the four tracks are over nine minutes in length.

The impressive, somnolent vocal arrangements are just icing on the proverbial cake, dour and morbid as they flow into the psychedelic swirls of the bridge in "A Code of Will" or soar over the haunted thrust of the "Upon Stone", but they wouldn't function without the constant nuance of the guitars and rhythm section, and thus the entire album gels so well that it's often difficult to discern where one component begins and the other ends. Unlike a lot of the trendier post-black metal out on the US landscape, like Liturgy or Krallice, Infera Bruo doesn't falter in some irascible, passive-aggressive attempt to shift between spastic boredom and cleaner melody to create some sort of dishonest contrast. There is no irony to this music. Everything makes perfect sense. One hypnotic note is followed by another, with no fat whatsoever to trim, no arbitrary progressions of notes that manifest disappointment. 33 minutes of total satisfaction, the one down side being that you almost immediately want more.

Infera Bruo is quite likely the best black metal related album I've heard from Massachusetts since December Wolves' Completely Dehumanized back in the 90s, and that was an entirely different beast (and yeah, I'm pretty biased there too). My one regret is not hearing this last summer when it was first put it out, but now that it's in my hands, I place it in yours. Accessible and emotional without feeling fashionable, safe or coy. Confident, coherent, lush, and varied darkness that builds upon its roots rather than ceding to them. Well worth your investment in time. Attention. Money. Whether your poison is Agalloch, Wolves in the Throne Room, Virus, Ved Buens Ende, Ash Borer, Castevet or 21st century Enslaved, you'll want to hear this. With luck, they won't get lost in the ceaseless tide of less compelling candidates for this niche.
Verdict: Epic Win [9.25/10]