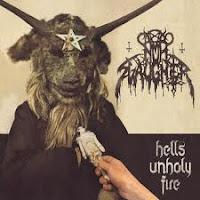 Known largely through their prolific body of work, as if they were a spiritual North American counterpart to Japan's Sabbat, and also their highly irreverent and memorable band name, Nunslaughter are nuntheless one of our most prized staples of fringe US extremity. I must admit that I've never held the group with the same adulation that other underground purveyors have expressed, but I do think they deserve their piece of pie, because if nothing else, they're really goddamn (and god-damned) fun. Hell's Unholy Fire was originally released in 2000 through Revenge Productions, but as its a bit of a chore to track down, Hells Headbangers has honored us with a CD reissue featuring modified artwork and packaging and a bonus live album which will likely thrill longtime adherents and collectors.

Nunslaughter has long been considered a 'death metal' band, but perhaps it's best to consider the context with which they are thus labeled. They draw their sound from the abusive, early thrash of Possessed and the raw grime of Venom circa 1980-1982, so while aesthetically they earn that brand, the music itself, at least on this album, is a pure manifestation of violent and mosh-worthy thrash with a lot of pretty standard riffing progressions that fluctuate between a muscular mid-paced headbanging meter, and bursts of early Slayer-like speed and screaming ("Cataclysm"). There are certainly enough old school tremolo bursts in the guitars, and a more growled timbre to Don of the Dead's vox to place it on the cusp of the genres, but just don't go into something like this expecting death metal of the Floridian or early Scandinavian scenes, because Nunslaughter are successfully paying tribute to a more archaic sound than either of those.

The 18 songs of the debut were kept quite short, generally hovering between 1-2 minutes but occasionally eclipsing this pattern as in the opener "I Am Death", which is almost 3 minutes due to the holocaust of the intro and the goofy laugh which settles into a Hellhammer like mid pace thrash groove. Here you are introduced to the raw fiber of the guitar tone, the capacity for the band to incorporate blast beats and warlike fills under the most primitive of riffing, but this is one of the more extreme songs on the record alongside the grinding blasts in "Killed by the Cross" and "The Dead Plague". The rest fall into a more simplified pattern with two or perhaps three riffs, rarely the sort that feel innovative or fresh (even for the turn of the century), but quite loyal to the crunchy brutality of late 80s or early 90s thrash somewhere between Nuclear Assault and Demolition Hammer.

I'm not going to lie, there are some admittedly pedestrian sequences throughout the album, even in lieu the band's established modus operandi. Songs like "Death by the Dead" and "Killed by the Cross" don't do a hell of a lot for me, and sound as if the band spent all of two minutes coming up with the basic structures and notation. But these are counterbalanced by a few swanky instances of sacrilege like "Burning Away" where they play around with the counterpoint guttural vocals and early Corrosion of Conformity crossover style songwriting, or "Nunslaughter" itself which follows the contour of another caveman thrash riff interspersed with the eyebrow raising lyrics that you definitely don't want to bring along to C.C.D. class next Sunday. I'd also say that the vocals are in general pretty average, voluminous grunts that are more of a muscular spin on crossover thrash but seem far more effective when they're balanced off with the more expressive growls.

I'm still a little lukewarm on this record, even despite the fact that I love the grimy sewage of the guitar tone and the simple and effective morbidity in a lot of the lyrics. But few if any of these cuts really stick with me, and considering that this took about 13 years and a large number of demos and splits to manifest in the first place, it's not all that impressive (I think I prefer the sophomore, Goat from 2003). That said, Nunslaughter has never held any disillusions about what it was creating, and Hell's Unholy Fire asks nothing more than you bang your head and writhe around in the hellfire for a brief time before moving on. At the very least, it's a reliable record that holds a measure of appeal to fans of sinister proto-black/death metal, crossover or truly old school death from the demo period of the mid-80s, and a firm fist up the poop shoot of the moral majority.