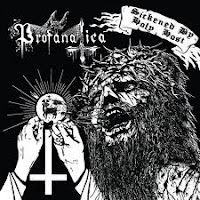 If sickness were a mental care institution, then Paul Ledney would be the chairman of said institution: at least until he had swindled all the drugs for his personal use and been terminated. Responsible for not one, but TWO of the most grating and unforgiving black metal bands in this country, his one way voucher to Hell has already been paid for six hundred and sixty sixfold. But he's still not through with the rest of us. Very often, in discussions on the 'value' or 'validity' of USBM in the broader context of a world that seems to partially shun it, I will offer Ledney's canonical blasphemies up as direct evidence that we have birthed what are indisputably some of the most repulsive and intimidating sounds out there. Disgusting Blasphemies Against God, mother fuckers. Dethrone the Son of God. Your move, universe.

Sickened by Holy Host is not a new Profanatica full-length, more of an experience so nice that they decided to vomit it forth twice. Basically a new EP's worth of material, recorded in two phases, one with a session musician and the other with long term collaborator John Gelso. The point is to write new material for both 'era's of the band, one in the early 90s and the latter more streamlined with the style of their 21st century full-lengths. It's a clever idea, sort of a means by which to exist in two separate timelines, one that should have ended and the other set in the present, but I'm going to be honest: aside from the obvious differences in production, I was not able to distinguish a huge difference between the two. The first session is noisier to the point that my ears were ready to explode from the dense brutality of the bass tone, while the second is far more gritty and atmospheric due to the more ominous breadth of the vocals. Otherwise, though, it's not a whole lot different.
Profanatica function of the sheer hatred and momentum of their sound, and the raw primacy of the riffing construction. One could make an argument that they're just as much a death metal band for using such corpulent, evil tremolo riffing, but the vocals and lyrics place is a bit further into the blackened category. Hellish sacrilege is par for the course, with little lyrical deviation, and the guitars so voluminous that they nearly burst from the recording. A song like "Holy Trinity Done" is a perfect example of what this band does right, blitzing the shit out of the listener so hard that he'll defecate pentagrams at his next pitstop. However, don't mistake this band for something entirely one-track in execution, they are capable of slowing down to a sludgy crawl (bridge of "Holy Trinity Done") or ripping out unadulterated old school death which rivals the most cavernous nostalgia maniacs you've heard in recent years.

In order to sweeten the deal even further, Hell's Headbangers has seen to supplement the CD version of this double LP release with the live 2008 rehearsal sessions that were released in 2010 on three 8" records as The Grand Masters Session. Basically a mix of newer and older material like "Conceived with Sin", "Once Removed Savior" and a huge 5-track medley cast in a corpulent, entertainingly irascible feed that's honestly quite comparable to their studio output. If you're into black metal recordings at their most raw, authentic and punishing, and you're into the pestilent, primordial Profanatica demos or comparable stuff like early Beherit, then I've no doubt you're going to feast on this as you would entrails. To its credit, it doesn't sound like shit at all.

Sickened by Holy Host isn't perfect, but it's at least enough to tide us over until the following full-length, while granting us a few new brutes to split our skulls open to. Black Cult Ejaculate indeed. A gloryhole for the leprous.
Verdict: Win [7.25/10]

Posted by autothrall at 5:24 PM