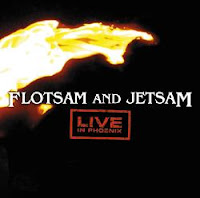 Flotsam and Jetsam waited over 20 years to nail us with a live offering, and the jury's out on whether this was too late to care. Long past their prime, but still releasing tolerable embellishments upon the sound and style they established through No Place for Disgrace, the band seemed to enjoy a small cult following despite the massive amounts of potential they seemed to espouse in the 80s. After all, with an alumni like Jason Newsted, whom they followed onto the Elektra Records roster, and further deals through MCA and Metal Blade, it was all but a sure thing that these Arizonans would become one of the 'saved' second tier of hopeful thrash metal acts. However, it just never happened for them, and thus they remain perpetually under the radar, surviving if never thriving.

I must admit I'm at wit's end with this sort of double dipping live DVD and separate live audio CD production that Live in Phoenix represents. It was also put out as a DVD, which in my opinion would be the preferred medium through which to experience it, but for some reason the label involved wanted to turn a buck on the audio alone. This could have been great: two decades of interviews, videos, rare tracks, a live gig in their home territory and then an audio CD bonus, all in one single package and well worth the attention of the long term fan, but instead it feels rather complete, and it's not like the actual set is all that impressive either. Kudos to the band for mixing up the playlist to incorporate something from all eras and manage to make it sound like it belonged together, but the performance itself leaves a little to be desired, in particular Erik A.K.'s vocals which aren't as spry and consistent as they once were...

I'm sure veterans will be a little disappointed that the only cut off Doomsday for the Deceiver is "Hammerhead", but at the very least they were offering a trifecta of "Hard On You", "Escape from Within" and the title track from No Place for Disgrace, which I'd consider their best album. Only "The Master Sleeps" makes it from When the Storm Comes Down, and the rest of the material from the MCA years consists of "Swatting at Flies", "Wading Through the Darkness" and "Secret Square" (Cuatro) and "Me" (Drift). The return to Metal Blade period is highlighted by "Chemical Noose" (Unnatural Selection) and the triad of "Trash", "Dig Me Up to Bury Me" and "Nothing to Say" from My God, which was their most recent studio album at this time. Note that there is nothing from High, which is probably acceptable since so many loathed that record with a passion...

The rhythm section does a pretty good job through the set, and as usual their music was a fine mix of grooving rhythms you could mosh to and more complex melodic structures. Most of the guys had been in the band for some time, at the very least since the late 90s, so they all do an adequate job. The lead tone is exciting and retains the vitality of the originals, but I'm not so sure about some of A.K.'s performance, which seems really strained on tracks like "The Master Sleeps". Half able to hit those notes, and half cracking or disintegrated in the attempt. That said, even though it makes sense for them to mix up the material, it's not the greatest of sets. For the built in audience, they should have included at least two more Doomsday songs and perhaps one other from the third album. But then again, I don't think this was a 'resurrection of Flotsam and Jetsam playing the oldies' gig so I can't really blame them for staying current...only for the fact that I just don't care for some of these selections.

Ultimately, it's not worth owning unless you are desperate to hear the band in some incarnation upon the stage, and have had no other means. And even then, spend a little extra to track down the DVD, because it's a lot more fun to witness when you can see them leaping around the stage in defiance of the geriatric lethargy these veterans can often experience. I've gotten to catch them a few times and I will say that they're better encountered in the flesh than on your couch. Unless you've got them on your couch...in the flesh...errr...I don't like where that's going.