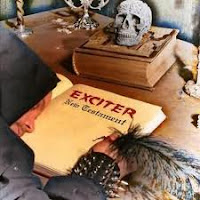 I don't think there's any question that long term guitar offender John Ricci was proud of what he had accomplished with the late 90s/early 'oughts Exciter line-up. They were releasing albums with some consistently through Osmose, gigging through festivals and small tours, and he'd unearthed what might be the band's tightest rhythm section ever, not to mention the harpy-like vocal talents of Jacques Bélanger. A cause for celebration? Sure, so they decided to hit the studio and re-record a number of Exciter tracks, newer and older, gorged upon a louder, punishing production that streamlined them with the most recent albums The Dark Command (1997) and Blood of Tyrants (2000). Sure, it had been four years since a proper new studio album and would be four more until one would arrive (with yet another new lineup), but this New Testament was surely worthy of filling the void...right?

That really all depends on just how much you treasure the original versions of these songs. I know that Ricci has mentioned on their website that he found these renditions to be stronger than their older incarnations, and it's not as if the band combed through and re-worked all of their early classics. The selection here is largely based around their live rotation, so they're all practiced and delivered with the intensity that they'd plan on bringing to the stage. I also don't think one could argue that, while perhaps not as unique as Dan Beehler, Bélanger had a more capable range and a lot more muscle and volume to his phrasing than his predecessor. But is there reason enough here to listen to these over my Heavy Metal Mania, Violence & Force and Long Live the Loud originals? I don't think so. As brazen as the new vocalist was, and as pumped and blustering as the guitars and drums felt on New Testament, I can't say that they evoke the same nostalgia, though they certainly functioned as a promotional showcase for their lives.

To be fair, Jacques takes this fairly serious, and the band seem to rein in a bit of the silliness that dampened my appreciation for Blood of Tyrants. Not all of the tracks chosen for this comp were taken from the 1983-85 era, there were quite a few more recent selections. I can only assume that the production of the latest album did not sit well with Exciter, for they've included "Rule With an Iron Fist" and "Brutal Warning" here, sounding more level, but not a whole lot different. Ditto for a few pieces from The Dark Command: "Burn at the Stake", "Ritual Death" and the title track. Kill After Kill is represented by "Rain of Terror", while Ricci has chosen to pass on any of the cuts from Exciter (O.T.T.) or Unveiling the Wicked, the two albums he was not involved with. Yet I'm sure that Exciter fans who had been following them through the numerous shifts in membership were not so keen on hearing this material so much as the classics, and there is a considerable chunk of this collection (60%, in fact) devoted just to the first three albums.

Of course they included the legendary title tracks: "Heavy Metal Maniac", "Violence & Force" and "Long Live the Loud" are all accounted for and uncompromising, and probably among the most fun here in terms of experiencing them through Bélanger's precipitous shrieking, which is often multi-tracked for a more harrowing assault. The solos are also a little different, admittedly better structured, but not enough that I'd forsake the old versions just for their execution. Ricci performs the bass himself, and does a passable job implementing a few fills rather than being lazy and following the guitar progressions 100%. Other classic here include "Stand Up and Fight", "Rising of the Dead" and "Black Witch" from Heavy Metal Maniac, the last of which is the one choice here which I feel is absolutely superior to the original form; "Pounding Metal" from Violence & Force; "I Am the Beast" and "Victims of Sacrifice" from Long Live the Loud, the latter featuring some nice shrieks over the thicker guitars that intro the song.

By now there are a shit ton of these sorts of collections from all over the spectrum, in particular popular among old school trad metal and thrash bands, but also some in the death and black metal fields; so you already know whether or not you're willing to accept the changes. There are many who will simply shun such releases on principle, but in truth they're not a bad deal if you favor the band's current style and sound. That said, I feel that the onus in on the band to really 'add' something if they plan on putting out such a collection, and in so many cases they just seem like enhancements in production or a chance for the artist to play with their new studio toys, or as with New Testament, the new singer. As I'm somewhat of a purist, I found this for the most part unnecessary, only one of the songs actually superior to its former life, but fans of Jacques Bélanger will certainly dig his interpretations, especially seeing that this turned out to be his last dance with the band (at least in studio). So, really, if you love The Dark Command and/or Blood of Tyrants like sibling(s), bump the score up a notch. I'll play the curmudgeon and stick with the Ricci/Beehler/Johnson versions.