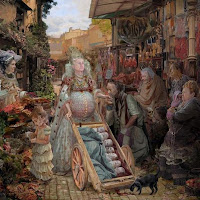 Sigh's 2010 effort Scenes From Hell seemed to arrive to a generally positive response, and I personally admired it for its primal gravitas. Gone were the bombastic, sweeping symphonic overtures of its own predecessor, Hangman's Hymn, and the newer songs were distinctly murderous and obscure, Eliran Kantor's surreal and psychotic cover art a perfect match for their aural aesthetics. With In Somniphobia, Japan's black thrashing eccentrics once again allow us to feast our eyes on one of the more visually stimulating album we're likely to experience this year, but musically I would say that it was somewhat of a throwback to the mesh of black, thrash, trad heavy metal and wild, eclectic outside influences that were so prominent during their 1997-2001 period on albums like Scenario IV: Dread Dreams and Imaginary Sonicscape, which just happen to be my favorites...

In Somniphobia resembles Scenes of Hell in that the production of the guitars and drums are not overly polished or as 'in your face' as you'll hear in a lot of modern extremes, but I'd say the actual composure of the riffs is cleaner and more accessible. There's a bit of the charging, 2007 symphonic era present in the structure of songs like "Purgatorium" or the bridge of "The Transfiguration Fear", but instead of an orchestra they are carried out with proggy organ pads and the fetching 70s hard rocking leads that were so prominent on an album like Hail Horror Hail from 15 years ago. The vocals are the same, abusively rasped incarnation that Mirai has been implementing for ages, but Dr. Mikannibal contributes her graceful accompaniments in carefully selected places through the course of the album, and certain guest features are present like death metal cult maven Kam Lee of Floridian forefathers Death and Massacre. In truth, though, while I found the vocals overall to comply with the band's modus operandi, they were not the stars of the show here...

No, that honor is bestowed to the many instances of avant-garde escapism strewn through the tracks, creating at once an exotic and familiar variety show, a circle of the sinister, silly and the gloomily macabre. From narrated, eerie orchestral interludes that descend into glitchy computer noises ("Opening Theme: Ludic Nightmare") to cutesy Eastern ethnic/ambient passages (the intro to the titular "Somniphobia") to the plucking of clean, jazzy Spanish guitars and ballpark organs ("Equale") to the scarce but effective use of Mikannibal's saxophone, you are greeted with must be one of the more worldly, scatterbrained exercises in Sigh's history. At times I felt some reminiscence for Hollenthon's debut Domvs Mvndi, at other times it felt like it was a natural successor to Imaginary Sonicscape, but what's so striking about the level of variation on this album is how it never manages to interrupt the natural flow of the song structures or the serial killer din of the black/thrash/doom riffing, vocals and lyrics.

Sigh excel at the grotesque, the weird, the left of center, while miraculously avoiding that 'forced' multi-genre-culturism pitfall that even a taut and talented act like Mr. Bungle would often succumb to. In Somniphobia is like trying to watch some colorful cult, foreign horror film while having three roommates simulcast 80s thrash, hairy progressive rock and cheesy world music on their respective stereos. It all congeals into this expansive, vicious and melodic broth of ear candy that is easily one of the more unique trips you'll be taking in this or any other season. Wonderful, batshit loco music. While I can't say I found myself quite so glued to the songs as I was on past works like Scenario IV: Dread Dreams, Hail Horror Hail, Imaginary Sonicscape or even its direct predecessor, it's an admirable addition to the band's legacy and sure to appear on or even top many year's end lists, and undoubtedly deserves to be there. Pure escapism 1 0 fucking 1.
Verdict: Win [8.75/10]