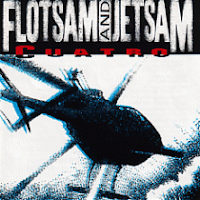 So the 90s managed to smack Flotsam and Jetsam across the face just like any other thrashing 80s hopeful. Slight changes in style were to be expected, and Cuatro, their second album for MCA put them in collaboration with Neil Kernon, a pretty big time producer and studio engineer who had worked with huge names like Judas Priest and Dokken. To their credit, they didn't morph quite as much as other acts from their niche, and Cuatro is more or less a more progressive extension of When the Storm Comes Down, if not in complexity than in dynamic range. But this album really starts to sag after a pair of passable opening tracks, and despite the fact that they were 'growing' as artists and experimenting with more rock-like structures, it just about severed all interest I had in the band's future...

I feel like Flotsam and Jetsam couldn't quite shake the specter of Metallica which hung over them even here, because there are a lot of simpler songs involving leaden grooves like the openers "Natural Enemies" and "Swatting at Flies" that kept making me think of "Sad But True" or "Enter Sandman" from The Black Album. Granted, Eric A.K.'s vocals are vastly different than James Hetfield's, but it's this 'dumbing down' sensation, this mainstreaming of the band's base thrash/power/speed sound into something contemporary, heavily overdubbed and generally safe for radio play with its anti-drug, anti-gang, we're all the same victims inside, good will to all men schtick that thrash bands were sort of forced into to cope with the ever-liberalized world of the 'open minded' that the 90s helped catalyze. A rage against nothing. There are thrash riffs here or there, peppered about the bulk of Cuatro, but so many of its constituent tracks are far too moody and rock-inflected that they feel like they're fighting at the straightjacket to escape the asylum of their past. Why? I've no idea.

Granted, Cuatro is far better produced than its predecessor. They got that right, at least. The guitars are still thick and effective but the heavier chords, chugging and melodic leads that glaze most of the facts are in close balance with the cleaner guitar sequences. Troy Gregory had left to join Prong, but the Arizonans did well in bringing on Jason Ward, a skilled, busy player with a deep tone who keeps the listener engaged with the thrumming of "Forget About Heaven" and several other cuts. More importantly, Eric A.K. himself sounds loads better than When the Storm Comes Down, richer and fuller in the mix, but this comes at the expense of some of his aggression. He's very soulful throughout this track list, and implements soothing harmonies that once in a while remind me of Layne Stayley of Alice in Chains. It's a decent fit for all these grooving songs spliced with melodies, and in particular he really blows up during "Secret Square" when he shifts from the low, deep range to screaming.

Alas, the album just fails to register beyond a handful of tolerable tracks like the pumping, uppity Anthrax-like momentum that opens "Natural Enemies" or the mild, mid-tempo groove of "Swatting at Flies", and there are some like "Wading Through the Darkness" and "Double Zero" that were admittedly pretty terrible. Who the hell were they writing this for? The alternative Doc Martin crowd was not going to like it, the loyal 80s thrashers weren't going to like it, the grunge guys weren't going to bite from this metallic-tinted apple. Was there a hidden scene for pseudo-funk rock-progressive-groove-post-thrashers I was blissfully unaware of? If so, then I'd imagine they might consider Cuatro a masterwork of expression, but for myself it was a prime example of how experimentation and enrichment can occasionally backfire and sully everything you've worked for. Flotsam and Jetsam's fourth outing isn't completely terrible, and there are moments where a catchy melody or impressive array of musicianship save it from the slag pit, but it was unfortunately a product of its time that simply doesn't belong in any other.
Verdict: Indifference [5.25/10] (take it from me, I'm broken too)