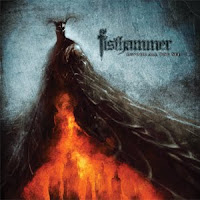 Pennsylvania's Fisthammer is another of those modern metallic endeavors which might never rest comfortably in a single stylistic niche, but nonetheless handles just about every aspect of its sound with a professionalism well past its years of existence. Brickhouse production comparable to a lot of better known thrash and death metal outfits, loads of semi-technical riffing and a mix of influences that include brutal US death, melodic European death and a heavy handed helping of 21st century thrashing. More importantly, unlike so many bands I hear these days who seem to unconsciously ape or paraphrase their heroes to a degree that allows them to cash in on nostalgia alone, Devour All You See seems like a lot of effort was placed in its construction, and there are numerous note progressions catchy enough to prompt repeated exposures.

They prove pretty early on here that they know how to throw out a hook with the melodic, bended striations in the verse of "Razorwaves", surrounded by surgical machine gun double bass sequences and smothered in a mix of guttural and rasped vocals which hearken back to the exchanges implemented by pioneers like Carcass, Deicide and Cannibal Corpse. That said, I wasn't wholly taken by the voice, as it never feels particularly vicious or memorable enough to brand itself on your conscience, simply a structured average for the medium. That being said, Fisthammer rolls you with so many savage dynamics that you'll soon hear the growling as just another of its percussive fundamentals amidst the spiky punishment of a track like "Aten: Fear the Obliteration of Earth" or "Bullet Raped", the latter of was one of my favorites here due to its unbroken chain of driving melodies and constant emotional escalation. Not an easy feat for a band with such a precise, soulless, and mechanical grasp of rhythmic variation, or such a polished studio standard.

I do feel like there's a chunk of album in the middle where the song quality does stand above the remainder, and that begins with "Bullet Raped" and runs through "Zombocalypse". They throw so many great melodies and neck straining grooves at you through these 4-5 songs that I feel like a few of them might have been better served near the opening of the track list, but in all honesty there's not a single tune here that doesn't have at least one segment which hits you like a tire iron in the hands of an experienced thug, and the fact that they so delicately balance the brutality of the rhythm section with the beauty of the dual melodies and guitar arpeggios is itself admirable. Devour All You See does cover quite a lot of ground, an all-purpose death metal assault redolent of the recent Coldworker, German's Centaurus-A or perhaps Belgium's Emptiness, all with comparable, sleek modern sounds. This is the obvious product of many, tireless hours of work, and while it's not perfect, and likely not to everyone's taste among the recent shit storm of early 90s throwback nostalgia, the acrobatic arsenal pays off with rhythmic fervor, interesting song subjects based in horror, fiction, and mythology, and a display of near boundless potential.