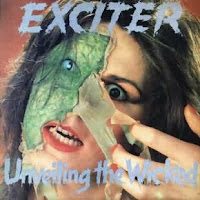 In what seems a strange twist of irony, the first consecutive Exciter record to appear on the same label as its predecessor was also the first that resulted after a major line-up change. After the Feel the Knife EP was released, John Ricci had departed from the Canadians' roster and with it a pretty important chunk of what made this band sound as it did. To their credit, they snapped up a good replacement in one Brian McPhee, and did not deviate heavily from the style they had already established through Violence & Force and Long Live the Loud, but there were enough tweaks to the formula that it doesn't feel like a precise doppelganger of its steely siblings.

I understand that the band considers this the start of a more decidedly 'melodic' phase in their career, and certainly some of the songs hold to this. For example, "I Hate School Rules" and "Living Evil" are pretty stock hard rock/metal for the mid 80s that fans of bands like Twisted Sister and W.A.S.P. might enjoy, the one difference being Beehler's offsetting screams. Still a lot of NWOBHM to be heard in the structure of the chords, but there definitely seems a toning down of the roughshod intensity that the band had laid out over prior recordings. That's not to say that tracks of this sort are necessarily bad, I quite liked the pumping bass lines and the little guitar fills used in the latter, but I don't feel that they were contributing much to my dreams of robing myself in leather and brass knuckles and heading downtown to start a fight, something I consider tantamount to the success of an Exciter record.

Elsewhere, when the band picks up the pace and blazes along in the proper speed metal context, Unveiling the Wicked feels a lot stronger. McPhee was perhaps a more technically fluid guitarist, or perhaps 'flashy' would be the word, and he runs his lines all over cuts like "Shout It Out", "Live Fast, Die Young" or the diverse "Invasion/Waiting in the Dark". As I mentioned, I rather enjoyed the melodic fills he injects into the songwriting (like the verses of "Die In the Night"), it gives them an added dimension that Exciter was previously lacking, but often at the expense of the sheer force and tone. Of course, there are times when his prowess is displayed in less than desirable fashion, like the showy and unnecessary 90 second guitar solo instrumental "Brainstorm" that should have been omitted here and left to soundchecks at gigs...

He's also not helped by the tone of this record. The rhythm guitar has a really ruddy tone to it, but not as solid and punishing as the previous albums. Beehler sounds about the same, and his screaming really shines in the chorus of the opener "Break Down the Walls", one of the best on this whole album (alongside "Die In the Night"), and Alan Johnson's fat fingerings are still quite audible, but as a whole, Unveiling the Wicked just doesn't seem as straight in the face as Long Live the Loud. Drums seem more restrained, and the songs, though still often pretty fast and furious, might have been geared towards gaining a broader audience, a feat that was precluded by Dan's continued use of the grating, banshee pitch.

Ultimately, I believe that the 'essentials' of the Exciter legacy begin with Heavy Metal Maniac and end with Long Live the Loud, but this album was certainly passable for the time and I still think a few of the songs deserve the attention of anyone into melodic North American speed or power metal of the 80s. Some of the lyrics are pretty dumb, but then they were never among the 'laureates' of the form. Make no mistake, this is still pretty raw sounding speed metal, an aesthetic the band would change for the s/t follow-up in 1988 (with a new vocalist). But it's not quite so consistent as the three preceding albums and thus I can understand why some fans might not enjoy it at that level. I don't, either.