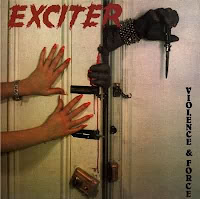 Is it a zombie trying to break down the door? A severe burn victim? Well, at least the switchblade, wristband and blood seem consistent with Exciter's debut Heavy Metal Maniac, even if any chance for a persistent mascot was about to be cast to the wind with the followup album. Violence & Force was my first brush with the Canadian speed metal savages, and it remains a personal favorites in their catalog, though it does suffer from at least one relatively frequent flaw that held it back from a broader notoriety, and continues to prevents it from completely scaling the walls towards the realm of masterpiece. That said, this is still a cult classic, worth the time of anyone who enjoys traditional, dirty North American metal, and like Exciter's first album, it never seems to depreciate with time.

The one obstacle that I've always had to hurdle with the sophomore is Dan Beehler's vocal performance, which at times comes off incredibly strained, cutting out in volume and serving as a detriment to the energetic assertion of the music. Now, Beehler's never exactly been a prima donna, and has always taken an honest, workmanlike approach to his bleating and screaming, but there are points throughout Violence & Force where he almost feels as if he's losing his voice. The shrill shrieks in the title track seem even more sustained and mighty than those of Heavy Metal Maniac, almost at Lizzy Borden or Savage Grace levels, and I quite like the grit of his throat as he howls through the verses, but often the lines seem a little too schizoid ("Scream in the Night") without any one pitch taking control, and some of the notes he hits (or doesn't hit) in tracks like "Destructor" or "Saxons of the Fire" seem rather painful. Hardly a deal breaker, after all he's still got quite a lot of character to his timbre that matches the grime of the street ready music, but even to one such as I who often values a corrosive imperfection in a speed, heavy or thrash metal front man, feels dodgy.

Otherwise, Violence & Force sounds great. The guitars have an airy, abusive nature to them which lays out the punk-influenced smack-down of the titular "Violence & Force" and "Swords of Darkness", caveman grooves of "Pounding Metal" (which ironically sounds similar to countrymen Anvil in their formative years) and mid-paced hard rocking abandon of "War is Hell", which almost feels like an unsung spiritual precursor to the Beastie Boys' "You Gotta Fight for a Right to Party" sans the rapping. The drums are mixed better here, more full bodied than they were on the debut, and Alan Johnson's bass lines are groovy and entertaining without deriding the far louder, metallic bludgeoning tone of the guitar. The solos too seem stronger, or rather, just as frivolous, but more determined to rip out against the pummeling undercurrent and manifest a sense of excitement as opposed to just filling up space. Like Heavy Metal Maniac before it, this never feels like innovative or technically impressive, just a heavier edge on a lot of the sounds one heard coming from England in the early 80s.

It's also a really well paced album with some variation. Surprising for a band which is so often branded with that tag of 'speed metal' that itself implies a sort of one speed or no speed characteristic. You've got your faster paced blitzes ala "Violence & Force", "Destructor" and "Saxons of the Fire" and then a slew of strong, memorable pieces like "Pounding Metal" which just lay into you with such primitive and unforgettable, molten hard rock riffing patterns that seem like an industrial grade KISS. There's also the sparkling trail of haunting acoustics that lead into the bluesy, Sabbath crush of "Delivering to the Master". It might be sacrosanct to think of anything Exciter has done as even hinging on 'ambitious', but I liked the plotting of the longer tunes here ("Delivering..." or the closer "War Is Hell") moreso than the previous album's ugly stepchild "Black Witch". In the end, Violence & Force marked a positive shift over to New York's Megaforce Records, expanded the Canadians' audience in both the States and Europe, and remains another timeless window into an epoch of innocent rebellion.