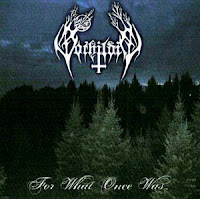 Bothildir is a project involving the drummer/vocalist Adroth, who also works in various other New England black metal projects like Shadar Logoth and the more recent, impressive Infera Bruo, but unlike those groups, this is music he has written, performed and recorded entirely on his own. To that extent, For What Once Was... does suffer from a few of the problems that plague a lot of one man, bedroom/basement black metal outings. The production has a few crippling obstacles, especially in the guitar tone, that I found difficult to hurdle, and the music itself doesn't feel quite as distinct as some of the later work he's involved with. That said, For What Once Was... is not entirely lacking in creativity; and considering this was an earlier manifestation of the man's talents, and not put out through a label or dealt a large budget, expectations should not run through the roof to begin with.

Bothildir was certainly going for a sound akin to those from the early through mid-90s classics circa Scandinavia, in particular you can hear some Immortal or Satyricon influence, maybe a dash of Burzum's evil tremolo picking. However, the synth tones he incorporates give the material a far more bombastic feel, something you'd expect more from the mug swilling pagan battle metal of a Bal-Sagoth, Equilibrium, Turisas, or perhaps even Summoning. Thus, the seriousness of the grimier riffs is in a charger like "Atrocities of Mankind" is counterbalanced by a more brazen, majestic, lighter tendency. There are a few pure orchestral/synthesizer pieces on the album, "The Misanthrope" and "Prelude: Beyond Majestic Mountains" which definitely have a bit of an earlier Nobuo Uematsu/Final Fantasy feel to their construction, and Ardroth experiments with a deeper, narrative clean tone on the title track, or a folksy Ulver like acoustic adjoined to creepy keys on the intro to "Dominion", one of the best moments of the album.

Hell, I think I even made out a Princess Mononoke sample (from the English dub) on that very song, and it featured one of the more hypnotic tremolo guitar progressions on the album in the verse. Another I enjoyed was "Entities of Putrid Cognizance", which has a dirtier, oblique mix to it but centers about these great, thrashing warlike guitars that weave well with the synthesizers that come in after a few measures. On the other hand, this song, and several others, certainly showcase one of the album's flaws: an inconsistent production between tracks that perhaps too overtly reveals an individuality that betrays the sum flow of the experience. Whether they were just recorded at different periods with different tones is understandable, but it lends the music a rather cobbled together feel. I also disliked the chugging guitar tone here, especially in the song "With Luciferian Pride" where it felt the most clunky grooving along, but really the mix of the guitars is lacking throughout.

Also, the decrepit rasping, while suited to the material, never really stood out to me, pretty average for the style and lacking of the venom and vitriol of its influences (Darkthrone, Satyricon and so forth). The overall impression I was left with was that, while I personally share a lot of Ardroth's tastes and inspirations, that the music itself never really broke the mold of so many others following this path. However, there are some strengths here which would be impossible to deny. The lyrics, at least those I've read for "Atrocities...", are decent and swollen with poignant imagery, if a bit haughty. Ardroth can write some pretty catchy, hypnotic guitar licks in what is generally a fairly stagnant niche ("Atrocities..." and "Dominion" in particular). The album also casts this palpable, balanced shadow of rustic scenery and glorious archaic warfare, so at the very least it succeeds in offering some escape to the listener, which is really the key.